Soaked in Civil War history, Franklin, Tennessee will delight history buffs and all admirers of classic architecture. Just 21 miles south of Nashville, Franklin continues to grow as a destination for travelers, while the local community experiences packed events, full of music and festivals.

Along the downtown streets, you’ll have the opportunity to unleash your inner foodie at one of the many delectable restaurants slinging southern fare and sweet treats. Between the restaurants are galleries and historic theaters, allowing you ample opportunity to sample the local culture.

But just steps from those close quarters are rows of Civil War-era homes, expansive old farms and aesthetically pleasing local towns to explore. Meaning, you’ll never be found wanting for things to do in Franklin. 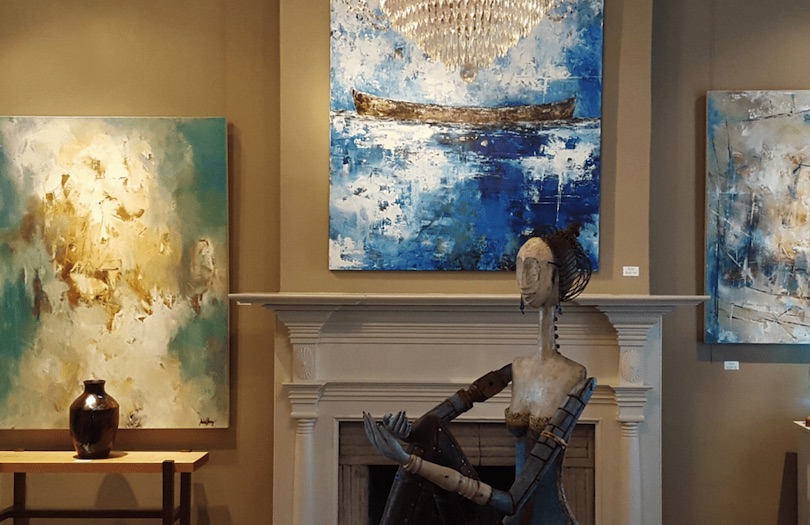 In the Clouston Hall in Downtown Franklin, Gallery 202 features a revolving door of exciting exhibitions with 20 artists showcased at any one time. Visitors can experience a range of art forms and genres from contemporary pieces to sculptures, antiques, pottery, jewelry, and glassware.

In addition to the art, you’ll have the chance to wander through the historic Clouston Hall, which has seen a lot over its 200-year history. Built in 1821 as a way for the Clouston family to host events (and three U.S. presidents), the hall was later used as a makeshift hospital during the aftermath of the Battle of Franklin. 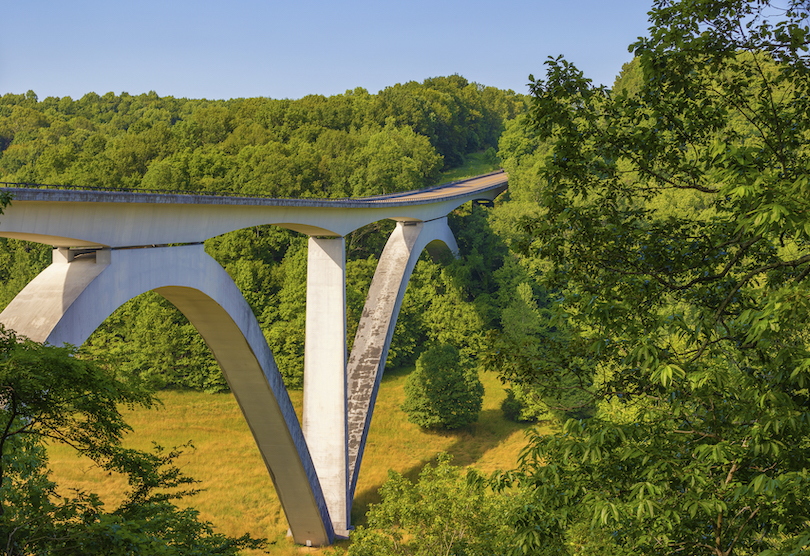 A striking double-arch bridge, the Natchez Trace Parkway Bridge is immediately captivating. Since being built in 1994, the bridge has won multiple awards while causing many jaws to drop.

The Natchez Trace Parkway Bridge travels over 1600 feet across the scenic valley. While the view of the bridge itself is stunning, walking across the arches provides exceptional vistas of the surrounding hills and lower plains.

After admiring the bridge and the views, continue along the Natchez Trace Parkway. The road explores the journey of Native Americans and European settlers, along with events from the slave trade and the Civil War. 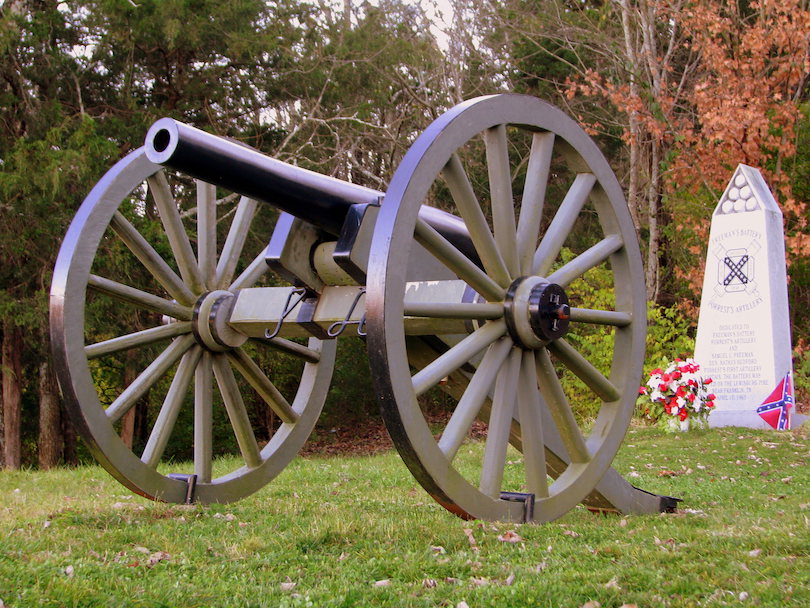 Just south of the downtown district, the expansive Winstead Hill Park is as beautiful as it is historical, thanks to the park’s connections to the Civil War. Come to the park for an escape within the wooded forests, breathing in the crisp air while wandering along its many nature trails.

Among the trees and beautiful landscapes, you’ll find an overlook of the park, which includes a battle map. Outlying the events of the war before you, learn about Winstead Hill Park’s position as a gathering point of General Hood’s Confederate Troops, who would eventually fight in the important Battle of Franklin.

From there continue to explore the park with great birdwatching and plenty of space for a picnic. 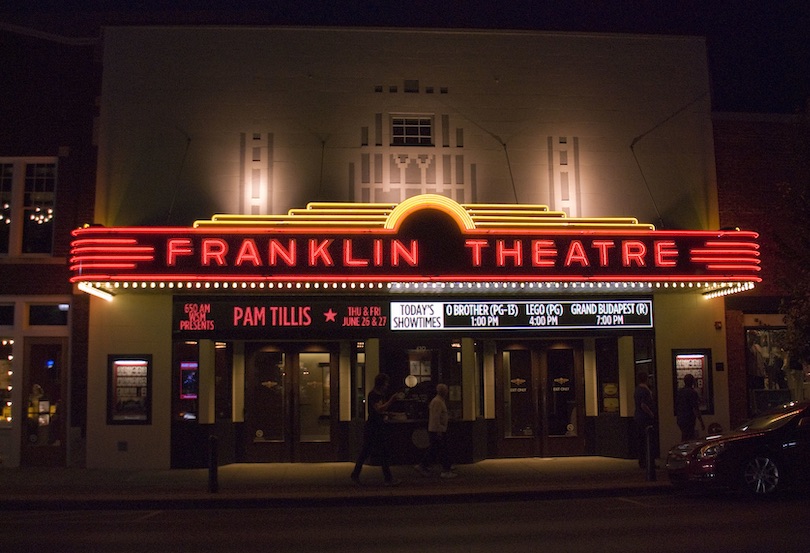 Since opening in the summer of 1937, the Franklin Theatre has been a beloved landmark in Downtown Franklin. Over the ensuing generations, locals and visitors alike have flocked to the theatre to watch live productions and concerts from touring musicians.

But, it’s easy for historic buildings and cultural hubs to lose their luster. After several years of disrepair, the theatre closed in 1989. It reopened over two decades later, quickly regaining its rightful place in community life. Now, along with a stellar lineup of shows, events, and festivals, the Franklin Theatre is also the place to go to get your cinema fix from the latest blockbusters and vintage films. 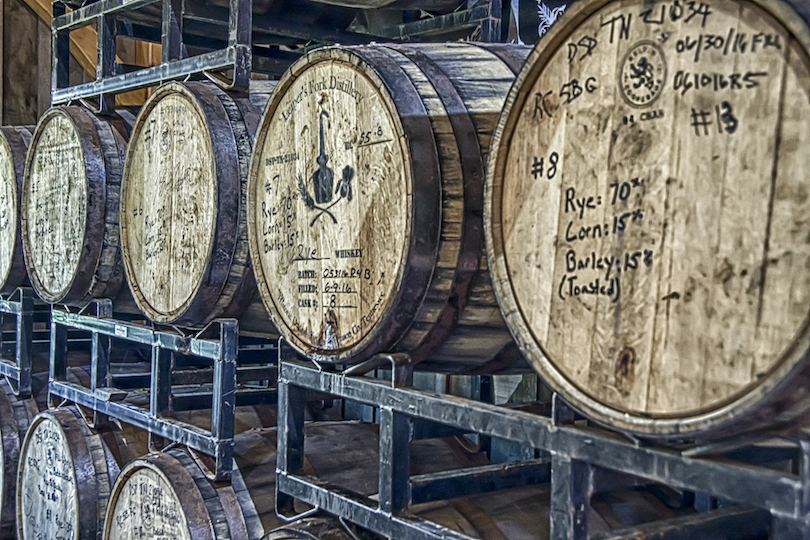 In the historic town of Leiper’s Fork, this distillery is one that matches and elevates the unique aesthetics of the local town. Just 10 miles from Franklin, the distillery opened recently in 2016, but immediately tapped into the rich history of distilling in Tennessee.

Leiper’s Fork Distillery is focused on making quality small batches of whiskey just as they did in centuries past when settlers first arrived in Williamson County. Using local ingredients and limestone filtered water, the exceptional results have low environmental impact but high flavor. Visitors can either kick back and enjoy a drink or embark on a distillery tour around the property, ending with a tasting.

7. The Factory at Franklin 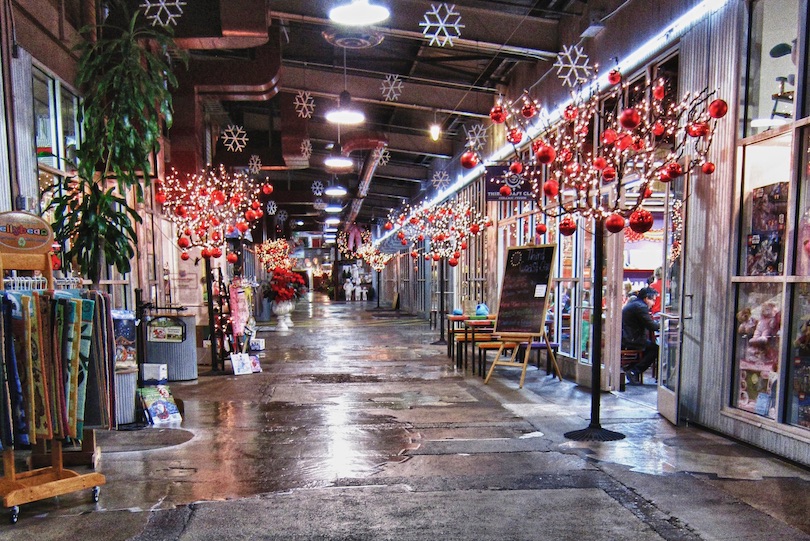 Renovated and repurposed, the Factory at Franklin is the place to go to eat, shop, and take in local culture at the same time. Just off Main Street, the Factory is part mall, part industrial plant, and was once home to 11 different factory buildings when it first opened in 1929.

Now on the National Register of Historic Places, the buildings house several restaurants, including the mouthwatering Mojo Tacos, along with historic venues which include the Liberty Hall and the Jamison Theater.

For those that want some retail therapy, then you can explore the rows of boutique stores, vintage fashion, home decor, independent art, and artisan goods to commemorate your time in Franklin. 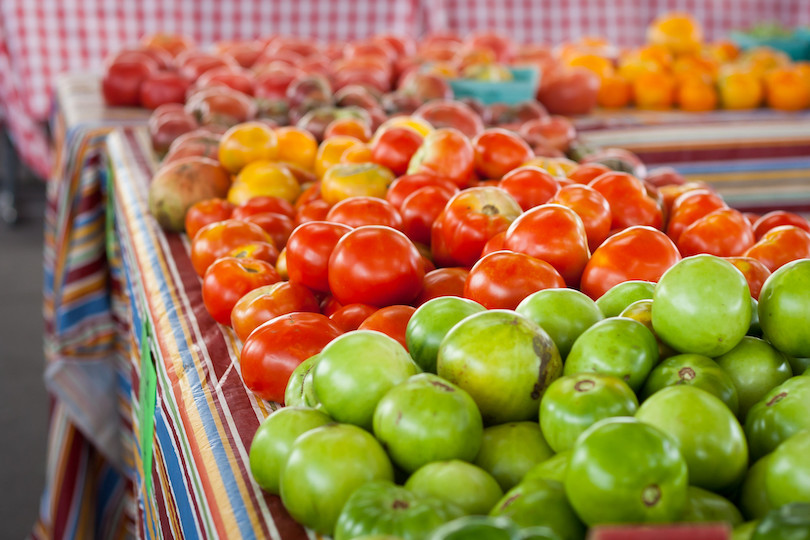 In what began as a vision held by eight local farmers in 2002, the Franklin Farmers Market has grown to include 80 regional farmers. The year-round market is frequented by thousands of locals, along with travelers, each Saturday from 8am to 1pm.

When packing for your picnic at Winstead Hill Park, you’ll be happy to know that you can get everything you need right here. The dozens of vendors along the aisles sell everything from fresh vegetables, meats, free-roam eggs, and delicious baked treats. Like any good market, you’ll find a selection of local handiwork from jewelry and pottery, to even furniture.

With the help of the volunteer program, the market is complemented by festivals and unique events year-round to make each experience different from the last. 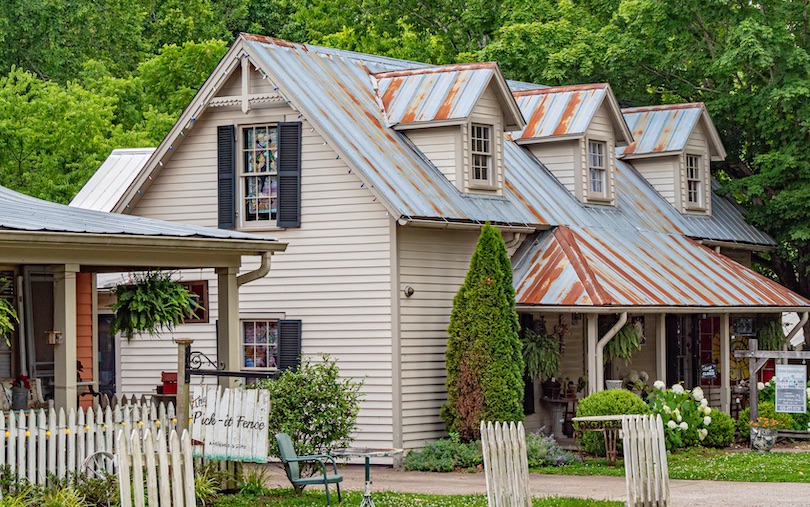 A brief 15 minute drive west of Franklin, Leiper’s Fork offers rural charm and culture in abundance. Population in the town has risen and fallen throughout the years, with the community now home to just 650 people, creating a quaint atmosphere along the major streets.

Now on the National Register of Historic Places, Leiper’s Fork is a lovely complement to your travels through Franklin, Tennessee thanks to its litany of cozy cafes and vibrant galleries to go along with the farm-to-table dining and many antique stores.

The town has a creative streak that connects the community, too. You can see it within the galleries, but also at the eclectic Puckett’s Grocery, through the fork references around town, and at the Lawnchair Theatre. 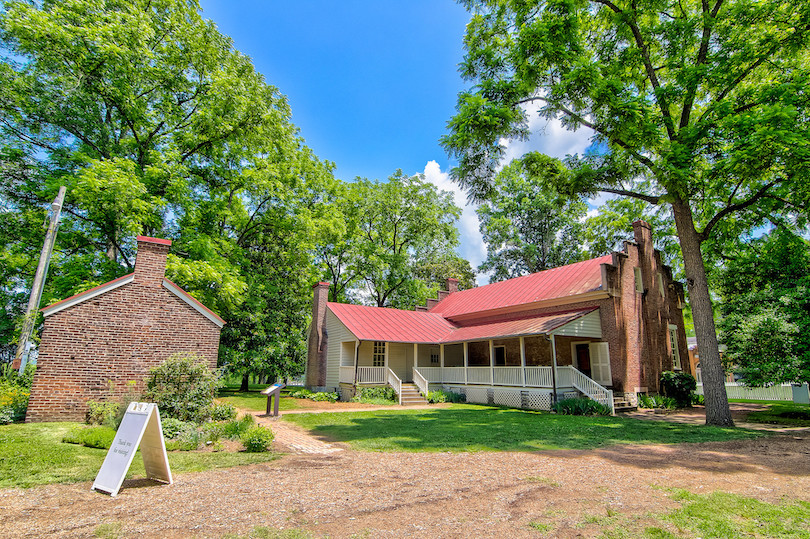 Beginning as a humble farm where Fountain Branch Carter, his wife and 12 kids lived, the Carter House and property boomed to an enormous operation that grew tenfold. For two decades, Fountain tapped into his entrepreneurial spirit to continuously grow his farm while becoming a prominent figure in the local community.

Then, in November 1864, bullets ripped through the home beginning one of the most significant days in the Civil War. First, the Union commandeered Carter’s home to set up property without ever realizing the Battle of Franklin would take place in its backyard.

With the Carter family now sheltered inside, over the course of an afternoon, 3000 soldiers perished, their bodies often piled three high. Today, you can visit the home to learn not only about that fateful day, but about the Carters who created such a beautiful estate. 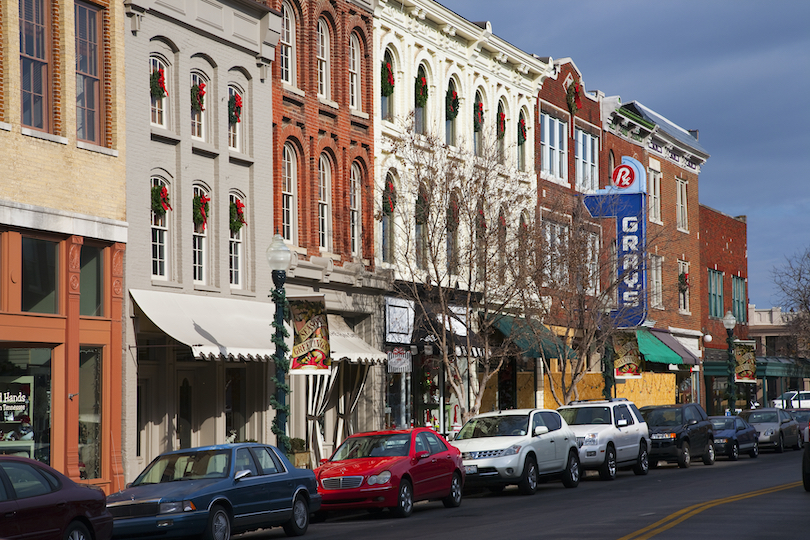 Teeming with antique shops, historic buildings, art galleries, and top-notch restaurants, Downtown Franklin is the pulse of the city. Run by the Downtown Franklin Association, the 16-block neighborhood is the place to go to experience local culture, whether that’s during the day or when the moon is shining down.

Beyond shopping, eating, and visiting the local art galleries, visitors can experience live music and productions at the Franklin Theatre. You’ll also have several historic locations, such as the Carnton Plantation, the McConnell House, and the Lotz House, within walking distance.

Being such a vibrant part of town, Downtown Franklin also plays host to a number of prominent local festivals throughout the year. These include the Main Street Festival, Pumpkinfest, and the Main Street Brewfest. 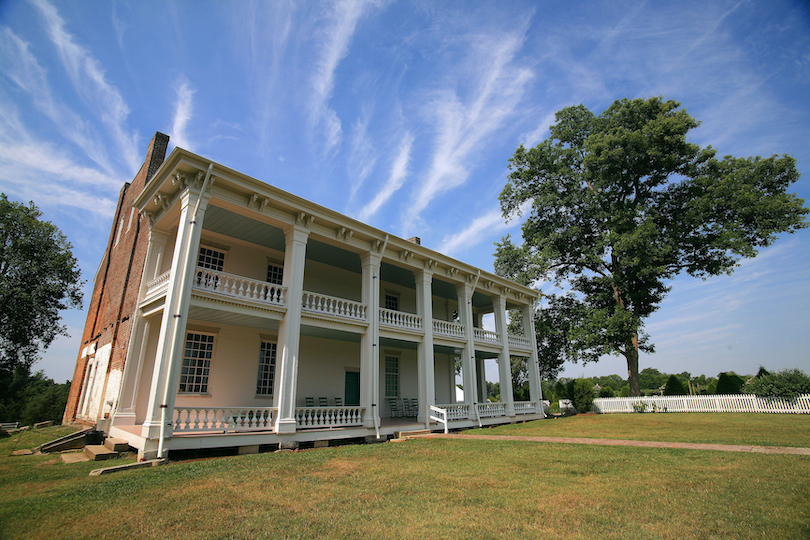 In 1826, the mayor of Nashville, Randal McGavock, built the serene Carnton Plantation, a gorgeous home and sprawling property that would eventually have a rich history that few would have envisioned. 38 years after the plantation opened, it became the biggest field hospital in central Tennessee during the Battle of Franklin.

Over the span of 5 hours, 10,000 men were killed, injured, or went missing near the Carnton Plantation, the last resting place for 1500 Confederate soldiers. During the battle, four Confederate generals were placed on the home’s back porch, their blood stains still visible to this day.

Visitors can take a somber and enlightening tour of the historic property, the beautiful grounds, and the aligning cemetery, home to many deaths from that horrid day. 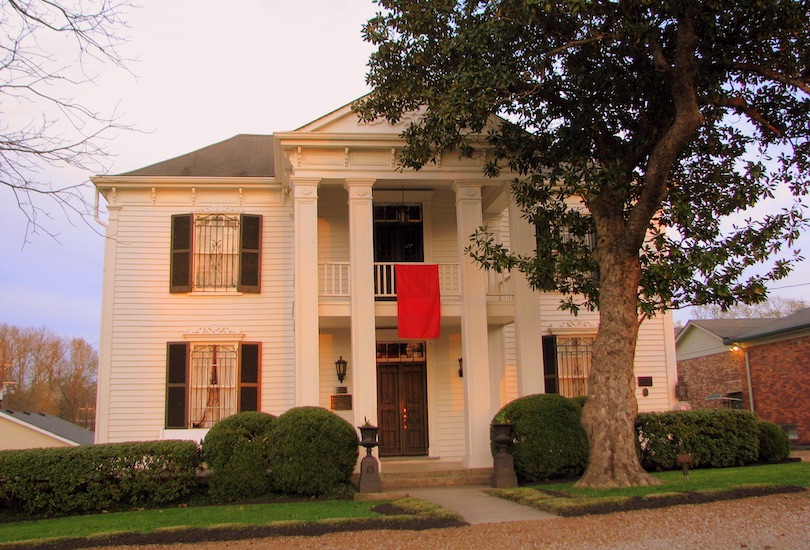 Dedicated to the immense talent and vision of Johann Albert Lotz, the Lotz House showcases his most prized creations. Johann, a German immigrant who arrived in Franklin in the mid-19th century, was a traditionally trained carpenter with exquisite abilities, especially as a piano maker.

Over time, he transformed his historic home into a showroom that still stands today. You can explore the home with each ornate piece of woodwork stemming from the hands of Lotz, along with furnishings that are just as beautiful now as they were back then.

Admission to the Lotz House Museum is free. The home also explores the events of the Civil War that occurred around Franklin. Something you can learn more about on a guided tour, which must be booked in advance.

Map of Things to do in Franklin, TN