Home to the majestic Mount Rushmore National Memorial, South Dakota has a lot going for it if you have time to explore. Set in the Midwest, it is bisected by the Missouri River. The east’s endless plains and prairies contrast delightfully with the diverse and dramatic landscapes of the west’s rugged reaches.

While both the Black Hills and Badlands boast awe-inspiring natural tourist attractions, there are the charming towns of Deadwood and Wall, and the cultured cities of Sioux Falls and Rapid City to visit. The state is named after the Lakota and Dakota Sioux, so you can also delve into its rich Native American history, heritage and culture.

With awesome outdoor activities, and everything from monuments and museums to canyons and caves, there are plenty of interesting places to visit in South Dakota. 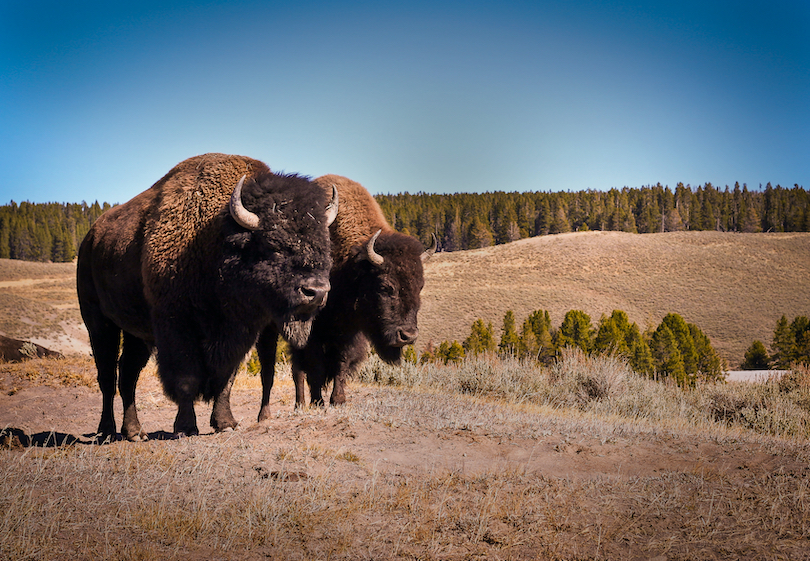 Set in the southwest, is the wonderful Wind Cave National Park which lies a short drive from the town of Hot Springs. While the park is home to pretty prairies and gorgeous grasslands, the standout sight is undoubtedly the cavernous cave after which it is named.

One of the longest caves in the world, its captivating complex of colossal chambers, caverns and chasms stretch a staggering 239 kilometers in length. With many more passageways just waiting to be discovered. Despite all of its dazzling and dramatic scenery, Wind Cave is particularly known for its breathtaking ‘boxwork’ formations, which are rarely found elsewhere in the world.

Besides taking tours around its humongous honeycomb of caves, visitors can enjoy hiking, camping and wildlife watching, with bison, bobcats and elk to be spied above ground. Protected since 1903, Wind Cave is a unique and unforgettable place to visit. 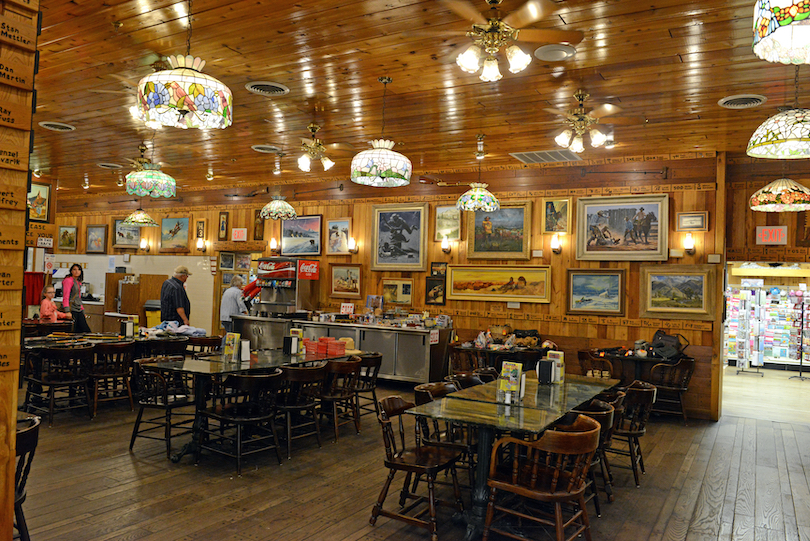 Wall is close to the state’s most popular and picturesque sights, so many people use the small town as a base to explore all of its natural riches. Known as the ‘geographical center of nowhere’, it welcomes millions of people every summer to its charming and quaint community.

Founded in 1908, it is named for the ‘natural wall’ of remarkable rock formations that can be found in the nearby Badlands National Park. Both the beautiful Black Hills National Forest and majestic Mount Rushmore also lie within driving distance of the town.

The town is also known for its large roadside drug store. Since opening in the 1930s, Wall Drug has become a popular tourist attraction and is now home to various cowboy-themed shops and restaurants. With a very friendly and welcoming feel to it, Wall is definitely worth stopping for a visit. 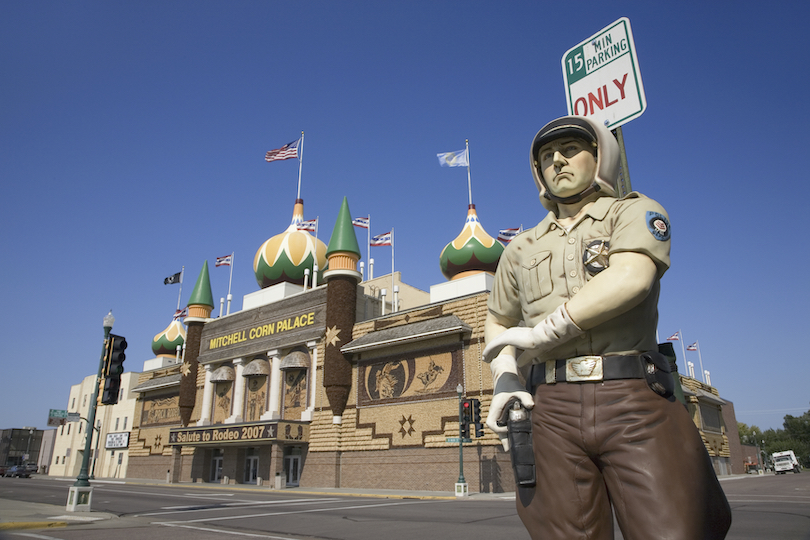 Situated in the southeast, and lying amidst fertile farmland and pretty prairies, is the magnificent town of Mitchell. Home to several excellent museums, it also boasts ‘the World’s Only Corn Palace’, the town’s main tourist attraction.

This phenomenal palace is clad in murals made out of grasses, grains, oats and corn with colourful minarets and onion domes adorning its daring design. Built-in the 1890s, to highlight the region’s rich soils and to encourage settlers to move to the area, the edifice now hosts local cultural and sporting events.

The town has a lively, yet laid back, historic main street to amble along lined with galleries, boutiques and restaurants. Its other main attractions are the Dakota Discovery Museum, which has interesting exhibits on pioneers and Native Americans, and the Mitchell Prehistoric Indian Village. 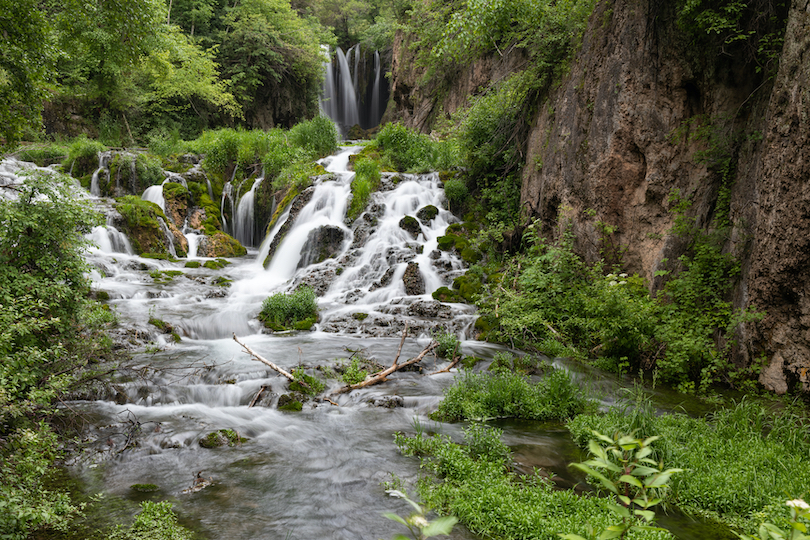 The beautiful Black Hills National Forest will delight nature lovers and outdoor enthusiasts alike. Sprawled over a large part of the southwest, its mountain-clad forests offer a wealth of recreational opportunities. Hiking, mountain biking, and camping are popular activities.

The rugged and remote Black Hills mountain range dramatically rises up above the Great Plains. Hidden away among its scenic slopes and verdant forests are lakes and streams, canyons, caves, and rock formations. It also encompasses the 2,208 metre high Black Elk Peak, the tallest mountain in the whole of South Dakota.

Winding their way amongst the wilderness are hundreds of kilometres of scenic drives and hiking trails, with some great fishing and boating to be had on its waterways. Visitors can also sometimes spy local wildlife. Elk, black bears and coyotes all reside within the rambling range. 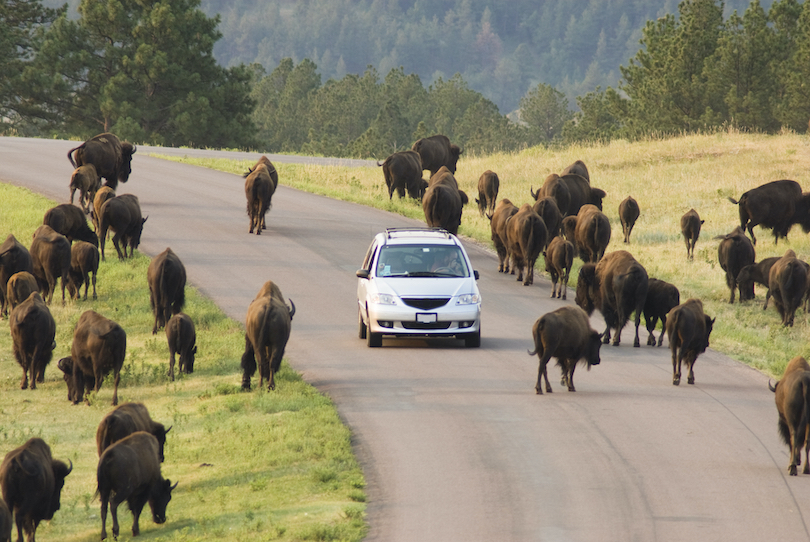 Nestled among the Black Hills is the captivating Custer State Park which is the largest wildlife park in South Dakota. Besides boasting spellbinding scenery, it is known for its huge herd of free-roaming bison; one of the largest in the world.

Established in 1912, the picturesque park is named after the famed cavalry commander Colonel Custer who passed through the remote region in the 1870s. Within its confines, you can find rolling hills and prairies, with the sensational Sylvan Lake and its rock formations one of the standout sites.

In addition to gazing out over its bountiful bison, you can also feed its ‘begging burros’, donkeys who come up to your car window and ask for a bite to eat. With hiking, kayaking and camping on offer, and the awe-inspiring Needles Highway to drive along, Custer State Park is certainly well worth visiting if you have the chance. 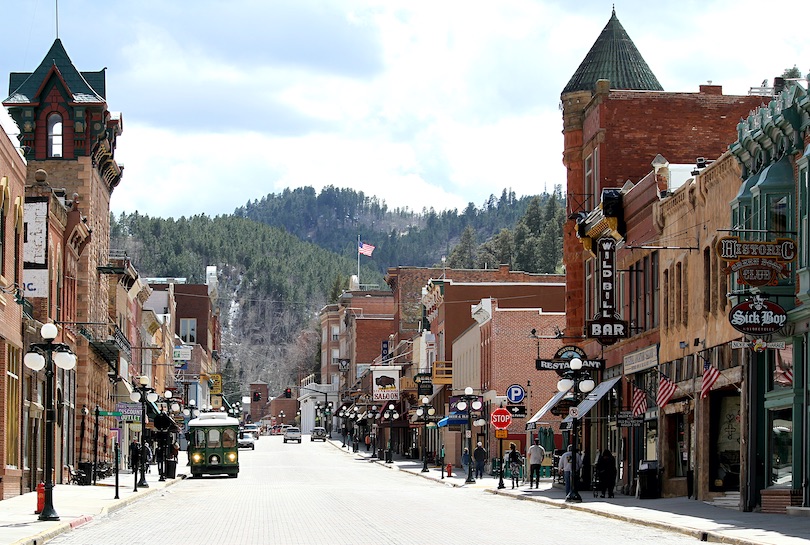 Renowned for its Wild West history, heritage and origins, Deadwood is a fascinating place to visit. The entire town is a National Historic Landmark. Founded in 1876, when seams of glittering gold were discovered in the surrounding Black Hills mountains, it is home to well-preserved gold rush-era buildings.

Due to its lawless early days and the larger-than-life characters, stories swirl around its atmospheric streets. On tours around town, you can hear all about famous figures such as Calamity Jane, Wyatt Earp and Wild Bill Hickok, and watch reenactments of epic shootouts.

As well as historic homes, museums and Mount Moriah Cemetery, you can also pan for gold at the Broken Boot Gold Mine. With bars and hotels still offering gambling, visiting the tourist town is like stepping into the past. Its historic main street looks very much like it did over a century ago. 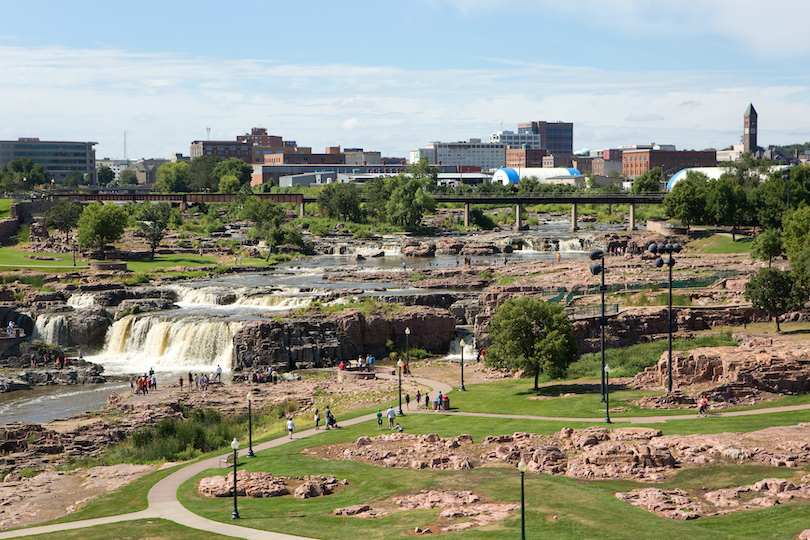 Set on the banks of the Big Sioux River, Sioux Falls is South Dakota’s largest city. Named after the wonderful waterfalls that lie at its heart, the city has galleries and museums to check out, as well as a lively downtown district to explore.

Its undoubted highlight, however, is the fantastic Falls Park. This is centered around the charming cascades and offers up excellent views over them. In total there are a staggering 70 parks and greenways to be found dotted about the city’s confines for hiking and cycling. Even skiing can be enjoyed in the Great Bear Recreation Park.

Visitors can delve into the city’s past at the Old Courthouse Museum or the Delbridge Museum of Natural History, both of which are well worth visiting. With some exquisite art galleries to stroll around and the gigantic Great Plains Zoo to explore, Sioux Falls has something for all ages and interests. 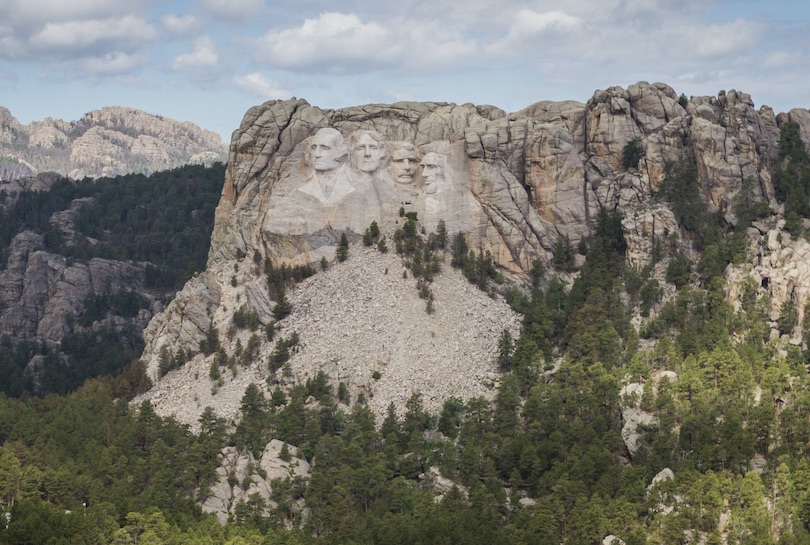 One of the most unique tourist attractions in the States, the majestic Mount Rushmore and its colossal carvings are visited by millions of tourists each year. The most photographed attraction in South Dakota, the stupendous sculpture can be found in the southwest.

Carved between 1927 and 1941 into the side of the mighty mount are the huge heads of four of the nation’s most revered and respected presidents: George Washington, Thomas Jefferson, Theodore Roosevelt and Abraham Lincoln. These famed figures respectively represent the nation’s birth, growth, development and preservation.

At the national memorial, you can not only gaze up in awe at the 18-metre high sculptures but also learn all about how they were carved and created at the site’s visitor centre. Each evening, the four figures are delightfully illuminated as a small but stirring ceremony takes place. 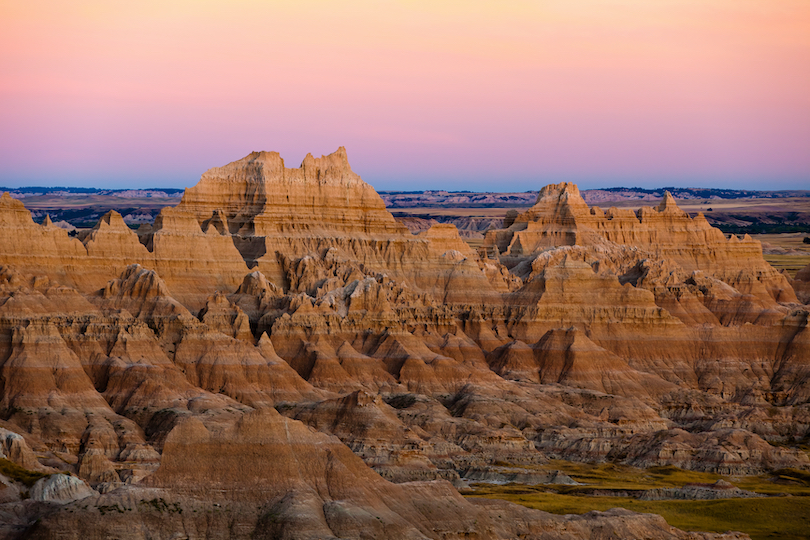 Home to colorful canyons and fabulous rock formations, the Badlands National Park boasts some of the most spectacular scenery in the state. Located under an hour’s drive to the east of Rapid City, it has some incredible landscapes for you to explore.

Formed over millennia, its reaches look almost otherworldly as huge mesas and vast valleys dot the terrain. Sculpted by the wind and rain, its spires and pinnacles make for some phenomenal photos.

While its dramatic landscapes have been preserved since 1939, local Native Americans have been inhabiting the area for much longer. At the White River Visitor Center you can learn about the rich heritage of the Lakota and their relationship with the rugged region. 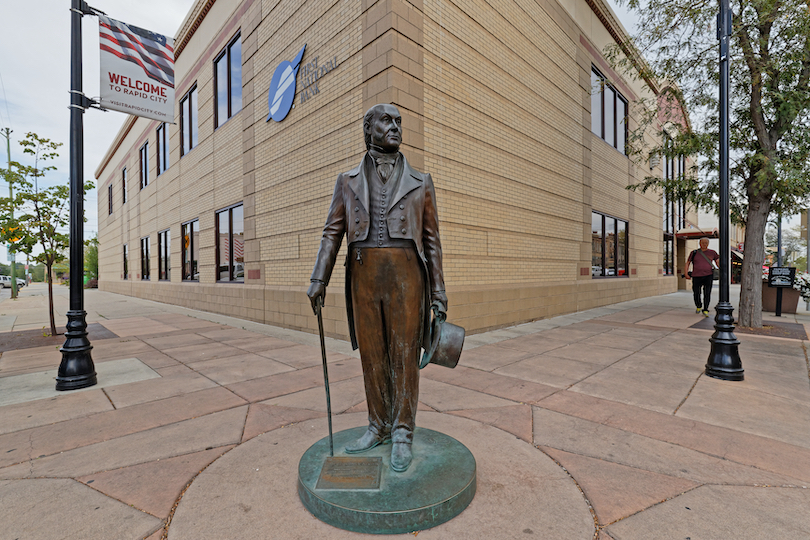 Just a stone’s throw from many of the South Dakota’s stunning tourist attractions, Rapid City makes a great base to visit, not only Mount Rushmore and the Crazy Horse Memorial, but the beautiful Badlands too. The city itself is well worth exploring as it has a lively downtown, full of arresting attractions for you to enjoy.

South Dakota’s second-largest city, it was founded on the banks of Rapid Creek in 1876 when gold was discovered in the nearby Black Hills. Visitors can delve into its interesting past at the Journey Museum. Both a culinary and cultural centre, Rapid City has excellent restaurants while strolling along Art Alley is a must for its graffiti, paintings and poems.

Rapid City is also known as the ‘City of Presidents’ due to its superb series of life-sized sculptures of each of the nation’s former presidents. With Custer State Park, and Wind Cave National Park, located nearby, Rapid City lies within reach of a host of natural wonders.

Map of Places to Visit in South Dakota