Puebla City in Central Mexico is probably one of Mexico’s most underrated cities. It may only be the fourth largest in the country, but its decadent cuisine, iconic Talavera pottery, and fascinating mix of Baroque, Renaissance, and Classic architecture make it well worth the journey.

Tucked within the mountain-and-volcano-clad Valley of Cuetlaxcoapan, Puebla is dubbed the ‘cradle of Mexican Baroque’. One of the best things to do in Puebla City is to visit its many religious and historical wonders from monasteries and mansions to museums and art galleries. In fact, it’s believed to have as many as 365 churches – one to mark every day of the year! 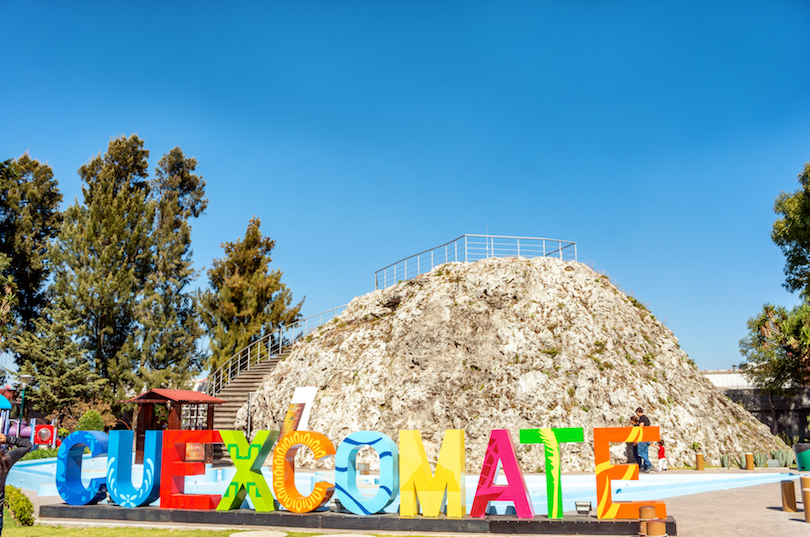 Volcan el Cuexcomate (the Cuexcomate Volcano) is the smallest volcano on Earth, despite not technically being classified as a volcano. Located in the neighborhood of Libertad, it’s actually an inactive geyser with an interior that can be explored via a metal staircase.

According to local legend, Cuexcomate is believed to be the love child of two volcanoes: the Iztaccihuatl and the Popocatepetl volcano. As far as history goes, though, it was actually formed as a result of the buildup of hydrogen sulfide after the Popocatepetl Volcano erupted back in 1064.

Back in its hey-day, the geyser was used as a place to dispose of the city’s trash and the bodies of people who had committed suicide, as they weren’t considered worthy of an appropriate burial. 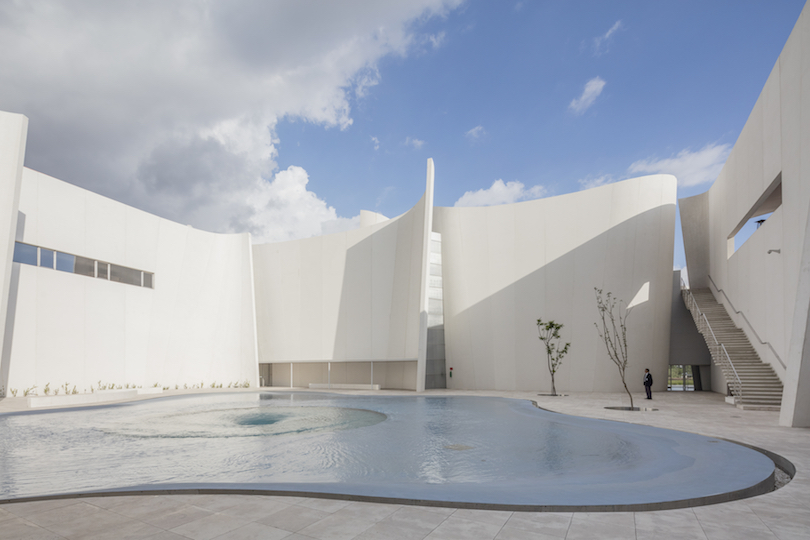 The Museo Internacional del Barroco (the International Museum of the Baroque) is a peculiar-shaped museum dedicated to all that is Baroque art. Designed by Toyo Ito, a Japanese architect, to be earthquake resistant, it’s characterized by walls of concrete, glass, reflective pools, and plenty of natural light.

The Baroque style was popular between 1598 and 1752, and the museum showcases all the features of this unusual period through artwork, theater shows, literature, traditional costumes, music, and dance.

Opened in 2016, the Museo Internacional del Barroco is still fairly new. You can spend hours browsing the many exhibitions, both temporary and permanent, with everything from paintings and sculptures, to installations and interactive displays that tell the tales of the Baroque era. 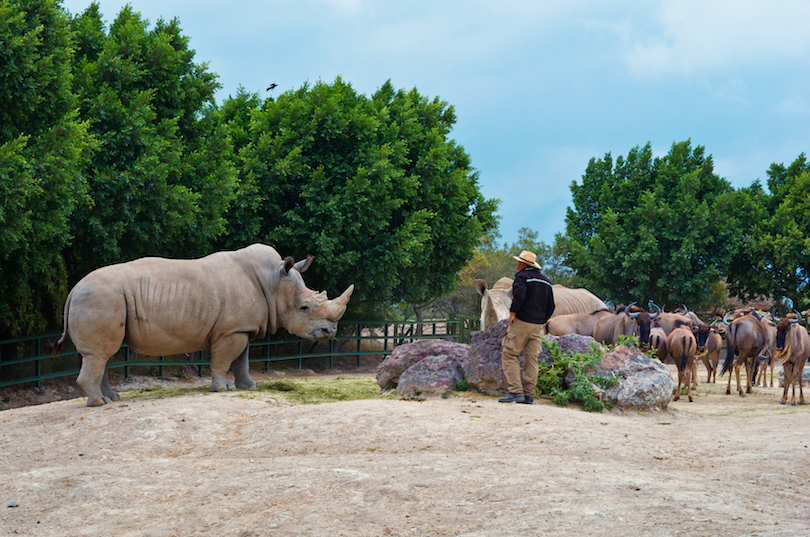 Africam Safari is a safari park on the outskirts of Puebla City. Opened to the public in 1972, it was initially the private animal farm of Captain Carlos Camacho Espíritu, a famous Mexican businessman. It was named after a combination of his surname and Africa, where most of the animals originally came from.

Don’t miss the Adventure Zone – a car-free area where visitors can explore a butterfly park, a herpetarium, an insectarium, a botanical garden, as well as kangaroo and bat exhibits. Other highlights of the park include bird shows, a zip line, and the Nocturnal Safari, where you can explore the park at night when the animals are most active. 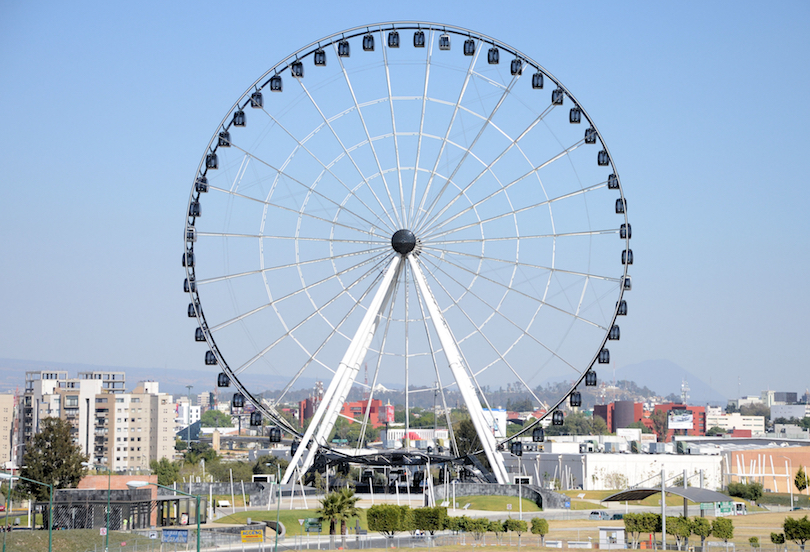 The Estrella de Puebla (the Star of Puebla) is Mexico’s alternative to the United Kingdom’s London Eye. This massive observation wheel offers some of the best views over Puebla City with its 30-minute rotation.

Once the largest observation wheel in the world at the time it was built, the Estrella de Puebla remains the tallest of its kind in Latin America. It runs every day of the week but is especially spectacular at night when the city is lit up beneath you. A full rotation lasts half an hour and is a great way to see the city’s famous landmarks and volcanoes.

Inside the Linear Park complex that houses the Star of Puebla, you’ll also find the Art Park, the Metropolitan Park, and the Atoyac River Walk. 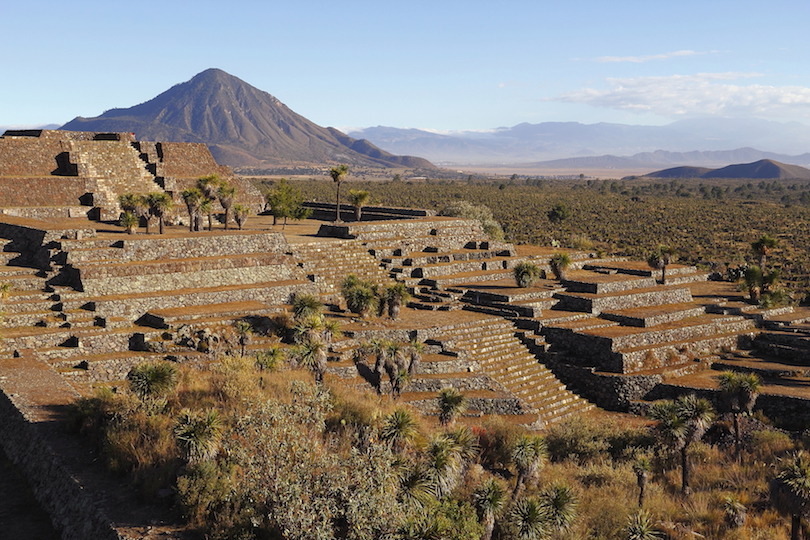 The Cantona ruins are a Mesoamerican archaeological site located around an hour’s drive from Puebla, Mexico. While excavations have begun, it’s believed that less than 10% of the original ancient city can be seen today – from cobblestone causeways, patios, and private residences to ball courts, temples, and an acropolis.

During its hey-day, Cantona was a walled city on a prominent trading route between the Gulf Coast and the Central Highlands. Spread across three separate sections, it was considered one of the largest and most modern cities in pre-Hispanic times during its prime.

The town was at its busiest between 600 and 1,000 CE. It was then abandoned after 1,050 AD. Cantona highlights include the Earth Fertility Plaza and the on-site museum. 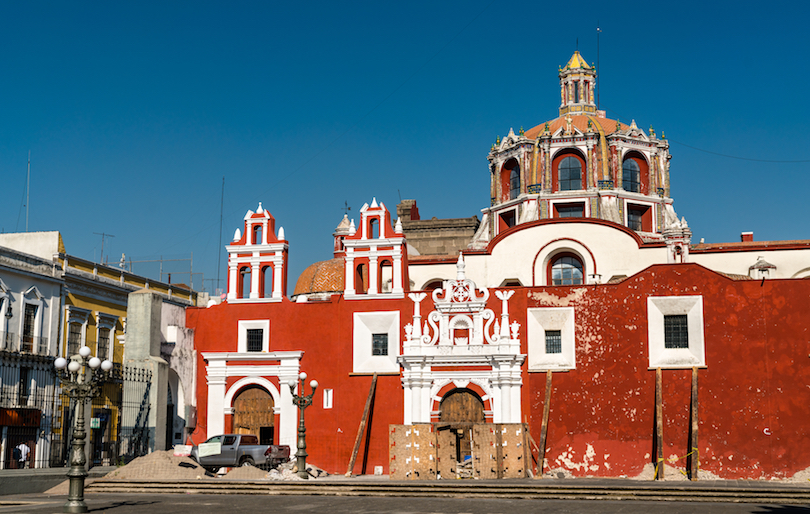 The Church of Santo Domingo, now known as the Kewa Puebla, is a historic mission church in Puebla. First built back in 1607, the church was initially destroyed by locals as a sign of rebellion during the Spanish invasion. It was then rebuilt by Fray Antonio Zamora in the 1700s but destroyed again by floods.

Santo Domingo went ten years without a church in the town; the current-day Santo Domingo Church was only rebuilt in 1886 and designed in the same style as the original church. Visitors can now explore the interior of the historic church when they visit Kewa Puebla. Don’t miss the arts and crafts fair held over Labour Day and the various festivities held over Christmas. 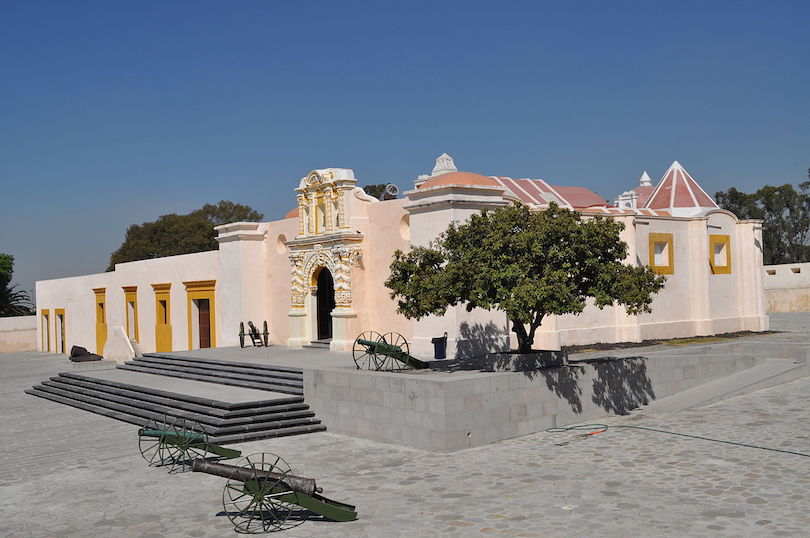 The 18th-century Fuertes de Loreto (Fort Loreto) is a historical military landmark and fortress in Puebla City. Initially built as a religious shrine in the 1600s, it was fortified two centuries later when it served as the site of one of the most famous battles in Mexican history – one that’s now marked with the annual Cinco de Mayo.

Visitors can brush up on their knowledge of the notorious Battle of Puebla in the Museum of Non-Intervention. Exhibits include letters, documents, and paintings of the infamous battle, as well as old military uniforms and weapons. There’s also an exhibit on Benito Juarez, the first Mexican president. 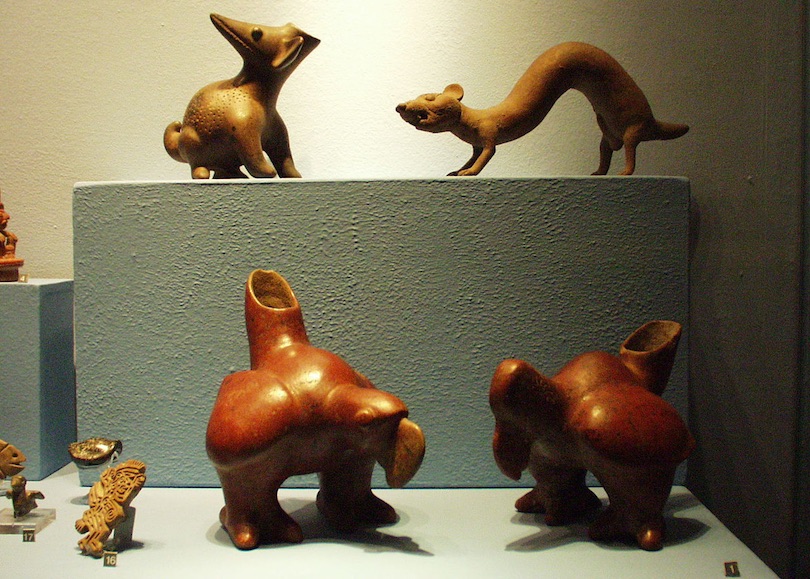 The Museo Amparo (the Amparo Museum) is one of Mexico’s most iconic historical museums. Spread across two colonial buildings dating back to the 17th and 18th centuries (one, a former hospital), the museum details Mexico’s fascinating history with pre-Hispanic, modern and colonial artwork, as well as ceramics, pottery, and ancient murals.

Mesoamerican artifacts include the Mayan stelae, a variety of old-world furniture, and hundred-year-old retablos. When you’ve had your fill of Mexican history, stop for a refreshment on the rooftop café terrace. Guided tours are available. 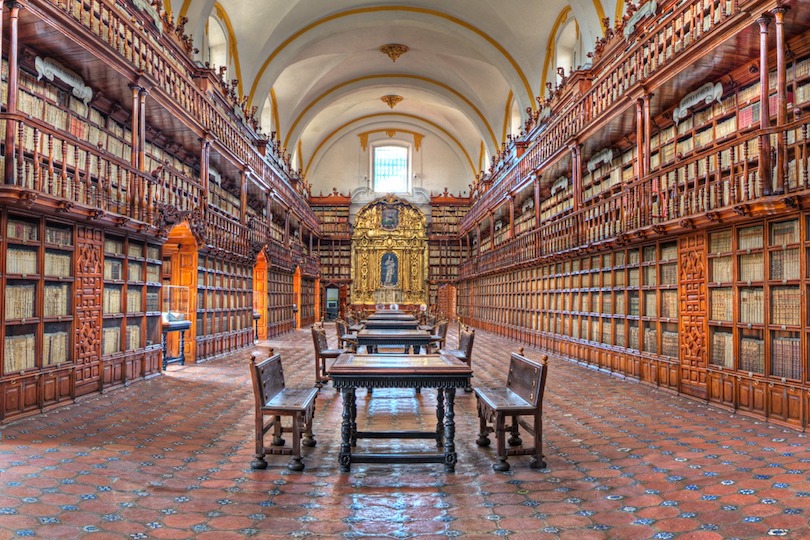 The Biblioteca Palafoxiana is an important public library in the center of Puebla. In fact, as it was established in 1646, it’s the oldest public library in the Americas. Inside, you can discover over 41,000 pieces of Mexican and international literature from books to manuscripts, many of which date back to the 15th-century.

While the library has been damaged by two 1999 earthquakes, it’s managed to survive, and its 2003 rebuild is the perfect place for a quiet read. Three layers of bookshelves made from carved cedar, coloyote wood, and white pine surround the walls. The most interesting finds include the earliest New World dictionaries and the 1493 Nuremberg Chronicle. 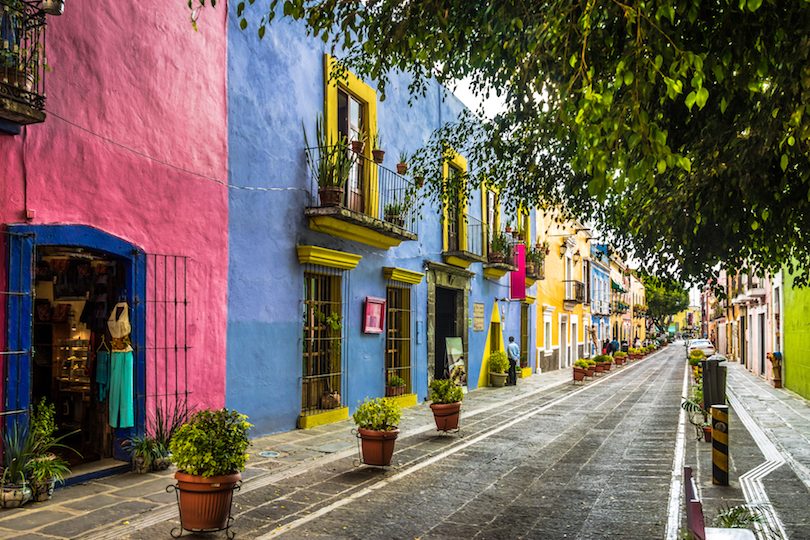 The Callejon de los Sapos (the Alley of the Toads or the Toad Quarter), is one of Puebla’s most famous streets, characterized by bright yellow, orange, and blue buildings.

Its unusual name stems from colonial times when the San Francisco River flooded its banks onto 6th South Street. To take advantage of the excess water, the locals built mills along the Callejon de los Sapos, which in turn brought an abundance of toads to the area. While not many toads remain today, there is a toad fountain that pays tribute to the street’s unique history.

A major highlight is the Toad Alley Market, where you can find antique books, iconic Talavera pottery, and other interesting treasures on Sunday mornings. Visit on a Friday or Saturday night and you can soak up the music and laidback atmosphere. 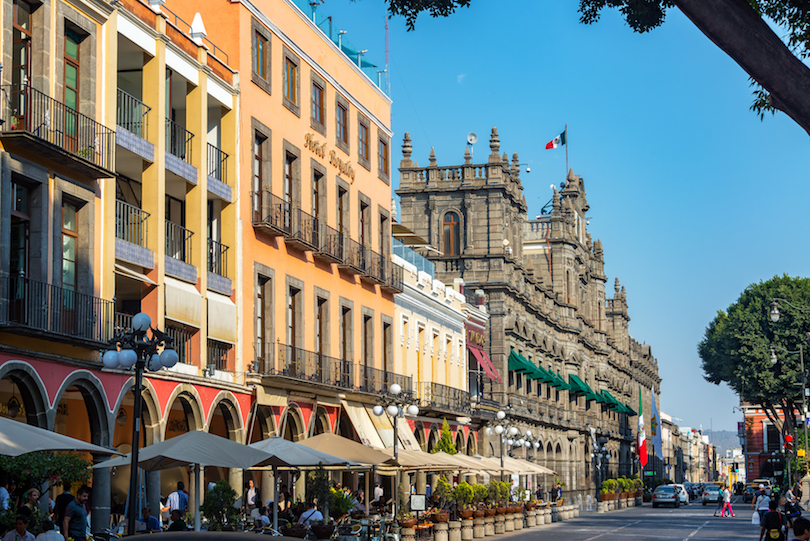 The tree-lined Zocalo is the most famous central square in Puebla, Mexico. This park-cum-plaza was originally built in the shape of a rectangle but was redesigned in the shape of a square as it was considered more attractive.

The plaza served as the main market for Puebla up until the late 18th-century, and bullfights were famously held here from 1566 to 1722.

Today, the square is the site of many cultural and political events, and there are plenty of fascinating statues and sculptures to explore, from Jan Hendrix to Monumento al Sitio de Puebla. Don’t miss the San Miguel Arcangel Fountain (1777), the City Hall, the Casa de los Munecos, and the Puebla Cathedral. 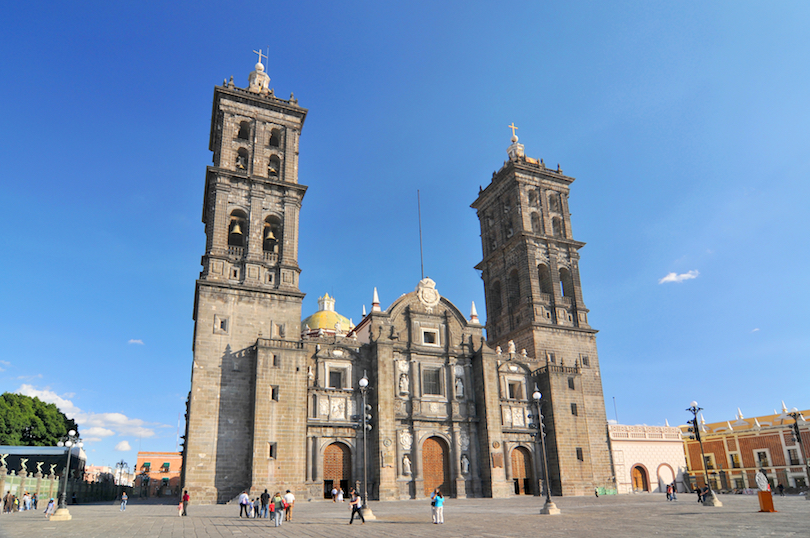 The Catedral de Puebla (the Puebla Cathedral) is a colonial Roman Catholic church overlooking the Zocalo square in the historic center of Puebla. One of Mexico’s most sacred sites and one of its oldest churches, the Puebla Cathedral was first built back in 1575.

Constructed in a mixture of Renaissance and Baroque styles, the cathedral has a dark stone façade and two twin towers – one of which remains a bell tower. Inside, you can explore 14 chapels and an unusual octagonal altar. The dome is special in itself, as it was built to mirror that of St. Peter’s Basilica in Rome.