Imagine yourself sitting on your hotel balcony, sipping your morning coffee while gazing at the Alps and valleys as far as you can see. You can also enjoy a fine white Austrian wine in an ultra modern glass-enclosed high rise. Or, if you prefer, cocktails in a hotel that combines the traditional with the modern.

Whatever your choice, Austria has an amazing hotel that will suit you perfectly. One thing for sure, with the Alps as a dramatic backdrop, you’ll drink in gorgeous alpine views wherever you stay in Austria. Oh, and the skiing’s not too shabby, either. 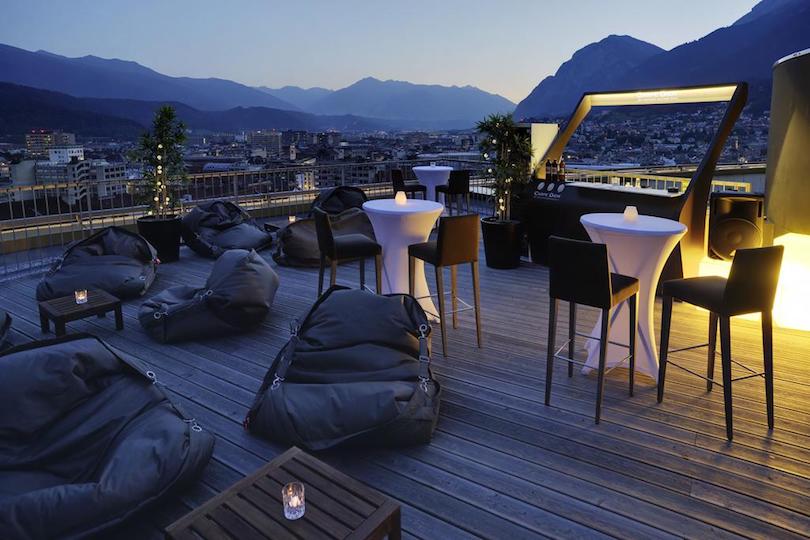 The views of aDLERS Hotel Innsbruck are just as great from the outside as they are from the inside. That’s because the great outdoors scenery is reflected in the glass that makes up Innsbruck’s tallest building. All 75 guest rooms spread over 12 floors have panoramic views of the Alps and Innsbruck. Styling, both insides and out, is contemporary, but the town’s historic section is just minutes away on foot. Room décor is modern and minimalist; it doesn’t detract from the scenery just outside your window. After a day on the slopes, enjoy tremendous views while enjoying a massage or sauna. 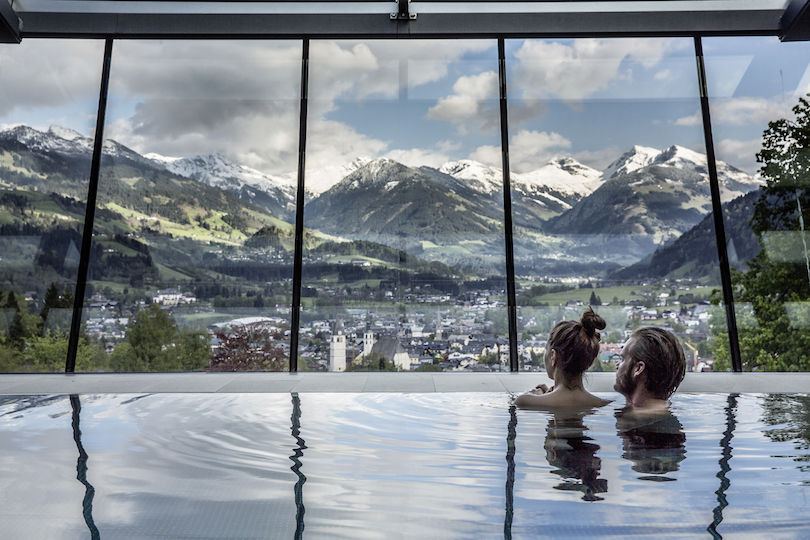 The Austria Trend Hotel Schloss Lebenberg has been providing super views of Kitzbuhel for more than 400 years, though it’s only been a hotel since 1967. Guests can either stay in the 130-year-old tower or in a newer building. Whatever all rooms are thoroughly modern. Guests rave about the skiing – many world-class ski champions come from Kitzbuhel – but they rave even more about the 46-meter (151-foot) long swimming pool. The pool, which holds almost 70,000 gallons of water, offers 360-degree views of spectacular scenery. 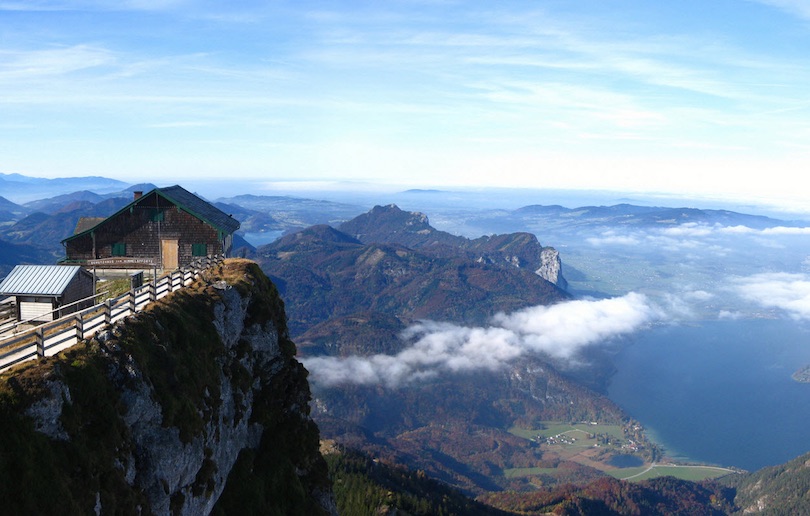 Forget the taxi when you stay at Schafbergspitze Hotel, situated at the top of Shafberg Mountain. Instead, unless you care to hike up a mountain carrying your luggage, your mode of transportation will be a steam-powered cog railroad. The train takes 35 minutes to climb Austria’s steepest cog rail line from St. Wolfgang. Once at the top, the views from this family-run hotel are simply spectacular. The 29 rooms are simply decorated. WiFi isn’t offered but why would you want to spend time online in this magnificent setting? Do note the hotel accepts cash only for lodging and meals. 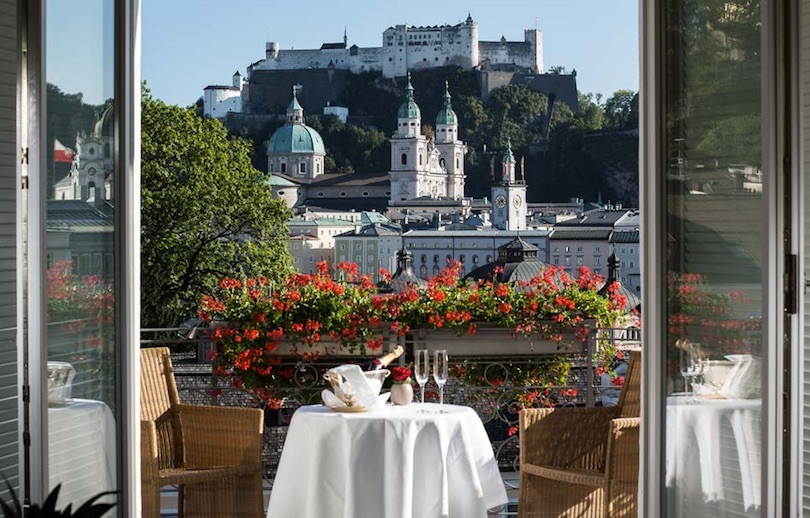 The Hotel Bristol is a place where elegance meets centuries of tradition and history. Once owned by nobility, the palace dates back to 1619 when an archbishop laid the cornerstone in what is now Salzburg’s historic and cultural center. The Hotel Bristol has been a home away from home for royalty and celebrities alike, from Emperor Franz Joseph to The Sound of Music cast. Period furnishings lend an aura of elegance; guest rooms have chandeliers. Some doors are originals. 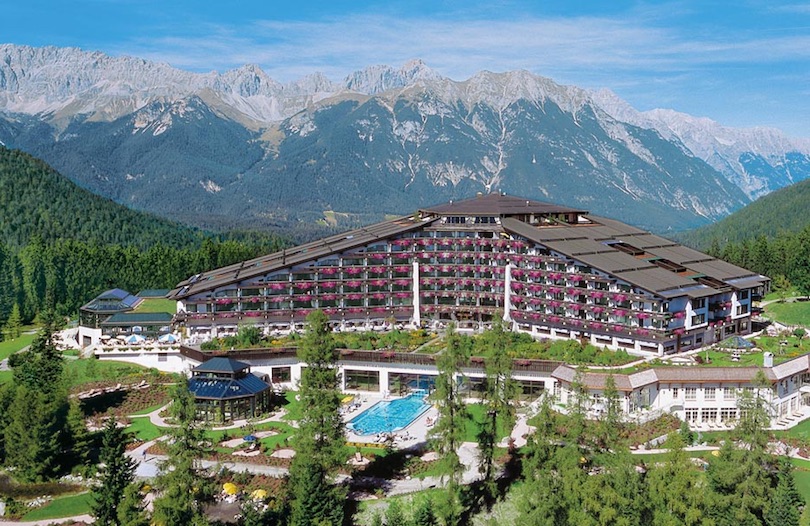 The Interalpen-Hotel Tyrol looks more like a beach resort than an alpine resort. That is, until you look up. Beach resorts, with their large outdoor pools and umbrellas, aren’t surrounded by forests or have mountains in the distance. But the Interalpen-Hotel Tyrol does. At one time, the largest hotel in the Alps, the hotel is a triangular shaped building that holds 600 beds. The A-shaped building has three floors on each end, rising to six floors at the top. Located in the Olympic region of Seefeld, the hotel boasts one of the largest wellness spas in the Alps. 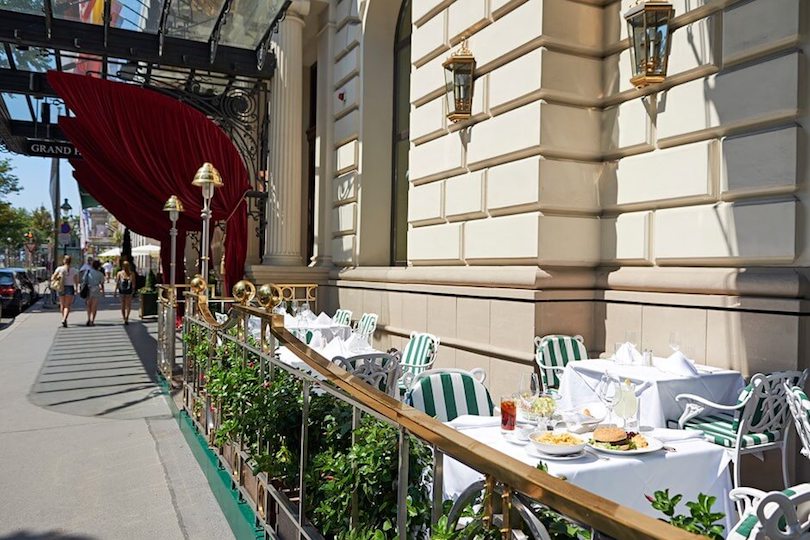 The Grand Hotel Wien was the first luxury hotel in Vienna, opening in 1870. Catering to the wealthy upper class, the Belle Époque hotel hosted Johann Strauss II when he celebrated 50 years of composing in 1894. Then along came World War II. It was occupied by Soviet troops in the decade following the war and by the International Atomic Energy Agency for over 20 years after that. It reverted to its hotel status in 1989. The hotel underwent a renovation, including restoration of its original façade. 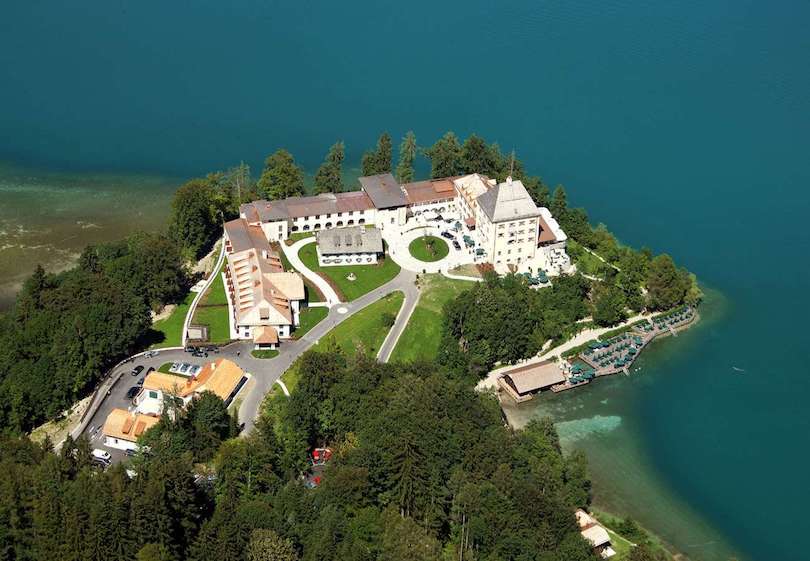 You’ll think you stepped into a fairy tale when you stay at Schloss Fuschl, a castle built in 1450. Sitting on a forested peninsula on Fuschl Lake, it later become a private residence and then home to a high-ranking Nazi. The hotel has 110 rooms including seven tower suites. The suites are decorated with Old Masters’ paintings. Even if you’re staying in a room, you can view Old Masters’ works in public areas. The hotel has a collection of vintage cars that you can drive. 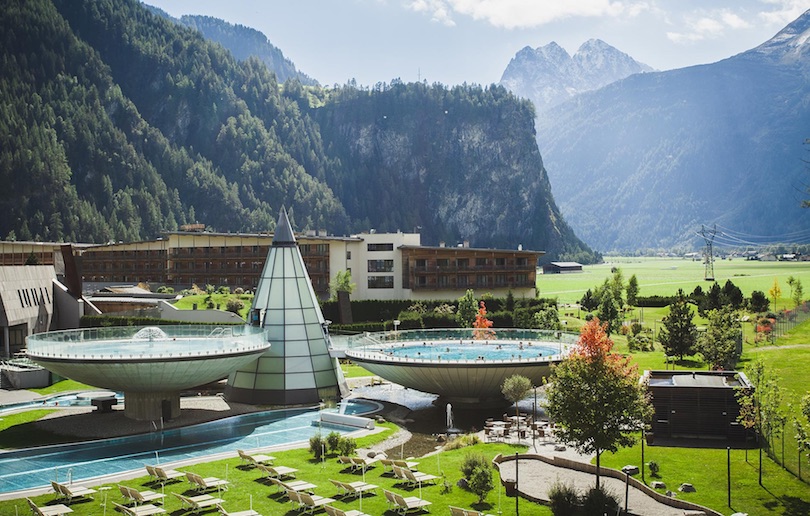 Relax your worries away by lounging in a thermal pool at the Aqua Dome Hotel in Langenfeld. The hotel has two indoor pools heated with thermal water or you can relax in one of the outdoor pools and spa while taking in the alpine scenery. This luxury hotel features innovative architecture, including a teepee-like structure near the outdoor pools. With 200 rooms, previous guests say the hotel makes a great couples retreat but it also offers a kids club for families with children. 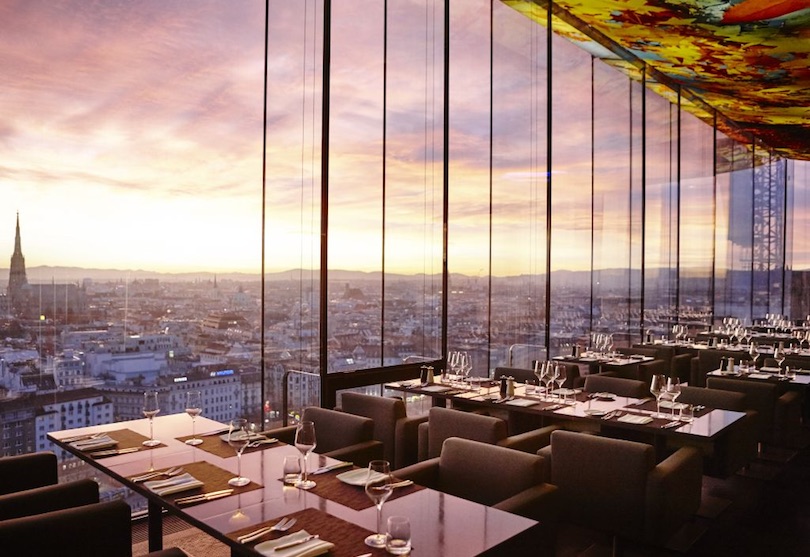 Vienna is often seen as a very traditional city. It’s probably the last place you’d expect to find an avant-garde glass skyscraper. That place would be the Sofitel Stephansdom, which reeks modernity throughout. Historic is not forgotten, however, as you need only look out the window to see Vienna’s historic district and the Danube Canal. The hotel’s 182 rooms are done in white, gray or black, again with modern furnishings, adding to its avant-garde feeling. The hotel, frequently described as glamorous, opened in 2010. 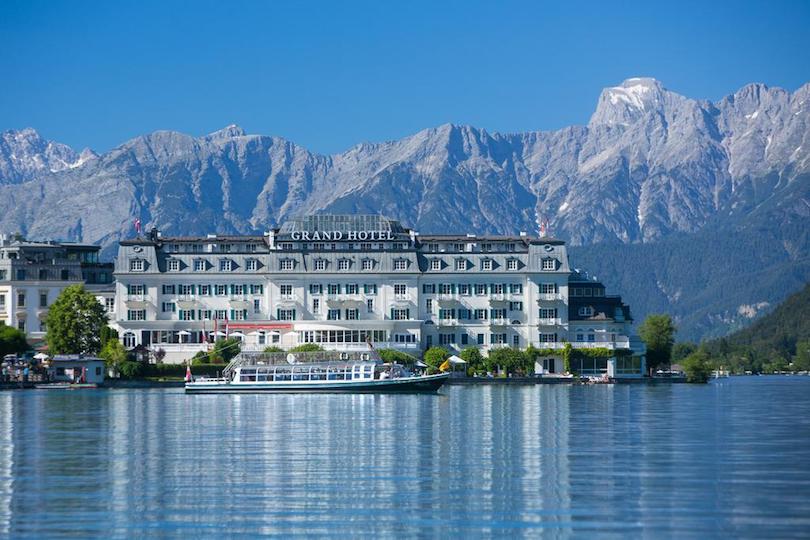 To stay at the Grand Hotel Zell Am See is to return to an age of civility and culture: the Belle Époque. The late 19th century building reflects the grandeur of the age in al picturesque lakeside setting on the shores of Lake Zell. The 130-room hotel features an indoor Roman style pool as well as a wellness spa. With the Austrian Alps as a backdrop, this Austrian hotel resembles a veritable wonderland in winter. The hotel is family-friendly, with kids getting their own bathrobe and special club just for them. 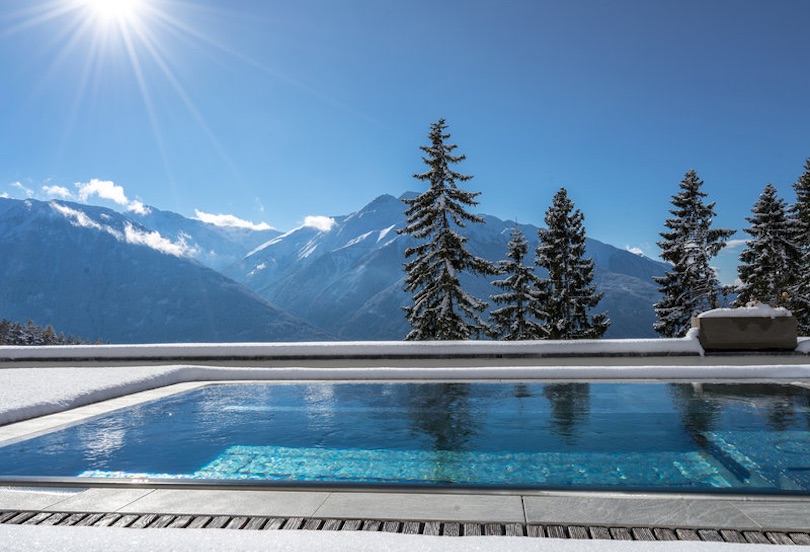 Wellness should come easy if you stay at the Nidum Casual Luxury Hotel where gorgeous scenery contributes to your sense of serenity. Take in the view from the outdoor infinity pool or from your room overlooking villages in the Seefeld Plateau and, always, mountains in the background. The multi-story hotel, which sits on a hillside, has one of the largest spas in Austria, with saunas, steam bath and indoor pool. All this will provide a welcome relief after you’re spent a day skiing on Olympic slopes.