The largest state east of the Mississippi River, Georgia is a delightfully diverse place to visit that is home to an enticing mix of cultures, cities and landscapes. The last of the original Thirteen Colonies to be established, it has a rich history and heritage with lovely beaches, state parks and vast tracts of untouched wilderness also on offer.

Lying in the southeast of the States, it is bordered by Florida, Alabama, Tennessee and the Carolinas with the Atlantic Ocean and numerous barrier islands to be found along its southeastern side. In the north you can find the beautiful Blue Ridge Mountains that slowly give way to the rolling hills of the Piedmont Plateau and then the coastal plains, swamps and shoreline of the south.

Tucked away amidst all its striking nature are charming towns for visitors to stop by, such as Athens and Helen which are particularly known for their attractive architecture. Macon – the ‘Heart of Georgia’ – is also often visited for its majestic cherry blossoms, as is Valdosta for its amazing azaleas and Augusta as it hosts the massive Masters golf tournament.

While countless small settlements are dotted here and there, over half of Georgia’s population lives in its capital Atlanta – a teeming metropolis that acts as a major economic and cultural hub. Known not only for its hip-hop music and connection to the civil rights movement, but its three skylines and Southern hospitality; it is home to the headquarters of huge companies like CNN and Coca-Cola.

The other main place to visit in the state is Savannah, a quintessential Southern city full of cobbled streets, moss-covered oaks and colonial architecture. As it is located along the coast, you can easily visit the Golden Isles of Georgia from here with Amicalola Falls and Okefenokee National Wildlife Refuge being yet other delightful destinations that are well worth checking out. 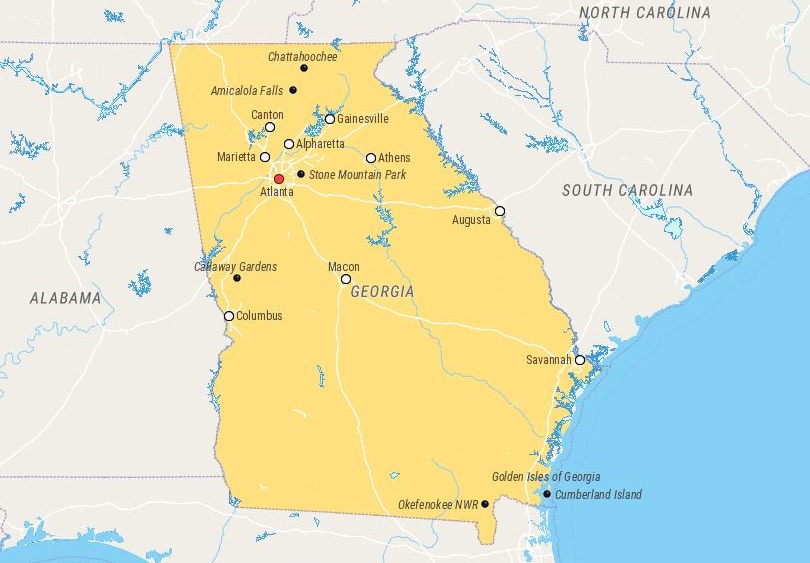