Home / Travel Inspiration / 10 Most Famous Lighthouses in the World

Set at the entrance to beautiful bays and natural harbors, lighthouses have prevented ships from running aground for hundreds of years. Sadly, however, many of them have become redundant and been replaced by more effective onboard navigational systems. The ones that remain are, for the most part, automated, and boast more powerful lights and lenses than the beacons used in the past.

As they were designed to be visible, lighthouses often make for very distinctive landmarks: their shapes and colors stand out against the surrounding landscapes. Consequently, they make for some fantastic photo opportunities and are usually set in spectacular spots along rugged coastlines or overlooking wild seas. 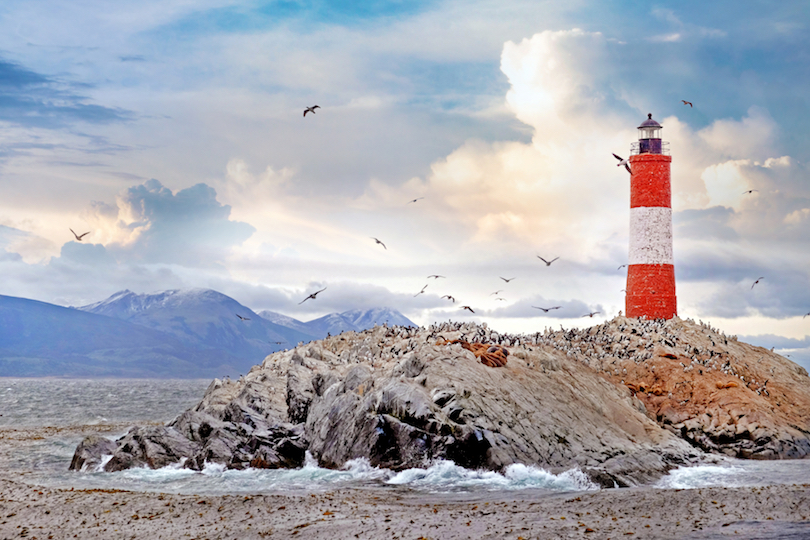 Romantically referred to as the ‘Lighthouse at the End of the World’, Les Eclaireurs is located in a breathtaking spot in Tierra del Fuego, right at the southern tip of Argentina. Lying on a small rocky island in the middle of the Beagle Channel, its red and white tower stands out delightfully against the majestic mountains that rise around it.

Having guarded the sea entrance to Ushuaia ever since it was erected in 1920, the lovely lighthouse is now a popular tourist attraction. From the nearby town, lots of people take boat trips to snap photos of it from up close with the mountains behind it. 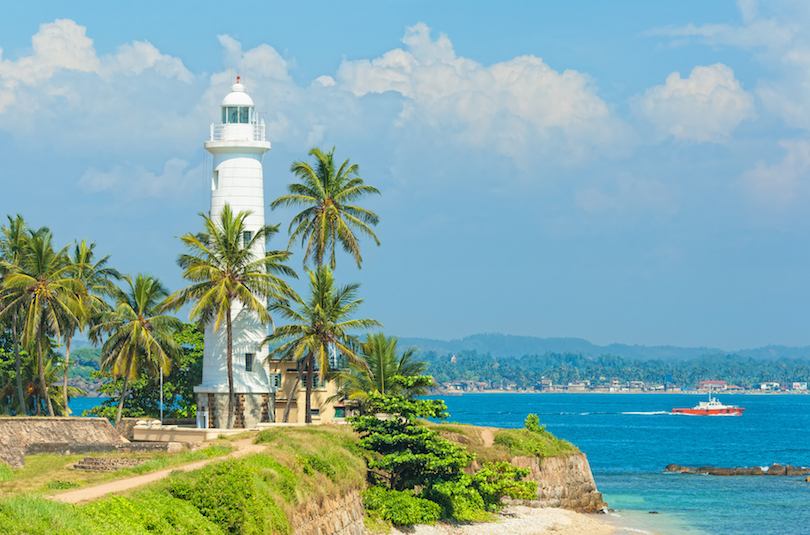 Located within the ancient walls of Galle Fort, the lighthouse of the same name has protected and the surrounding waters ever since it was first erected in 1848. While it is the oldest lighthouse in the whole of Sri Lanka, the current lighthouse’s blindingly bright white walls only date to 1939, when it was rebuilt after a devastating fire.

Nestled away on the country’s south coast, its magnificent location at the entrance to Galle Harbour with palm trees all around it makes it one of the most picturesque and photographed landmarks in Galle. 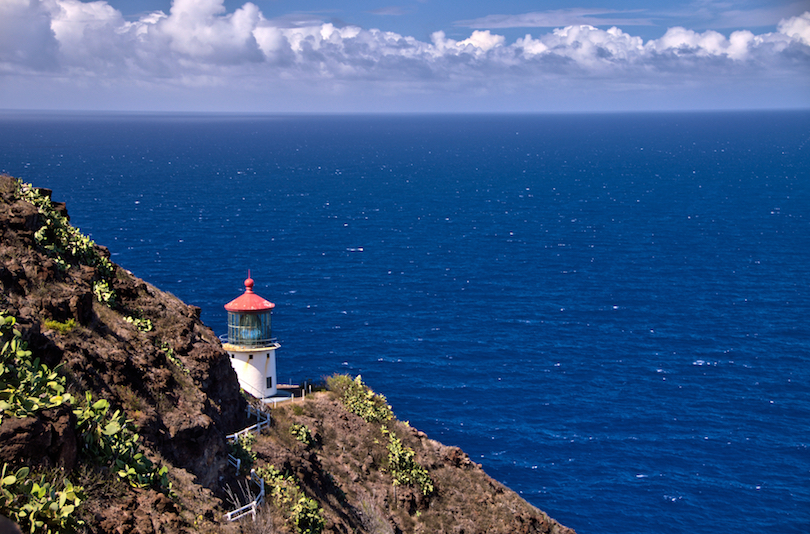 Perched upon the eastern tip of Oahu in Hawaii, Makapuu Point Lighthouse is set in one of the most spectacular locations imaginable, as the waters of the Pacific stretch endlessly before it. Despite only reaching 14 meters in height, the light from its tower can be seen from far and wide thanks to its prominent setting atop a rocky cliff.

Coupled with the bright blue waters of the ocean below, these enormous volcanic cliffs certainly make for an impressive sight with Makapuu Point Lighthouse hidden amongst them. Built in 1906, the lighthouse has long been of the utmost importance as it guides ships from the west coast of the US to Honolulu. 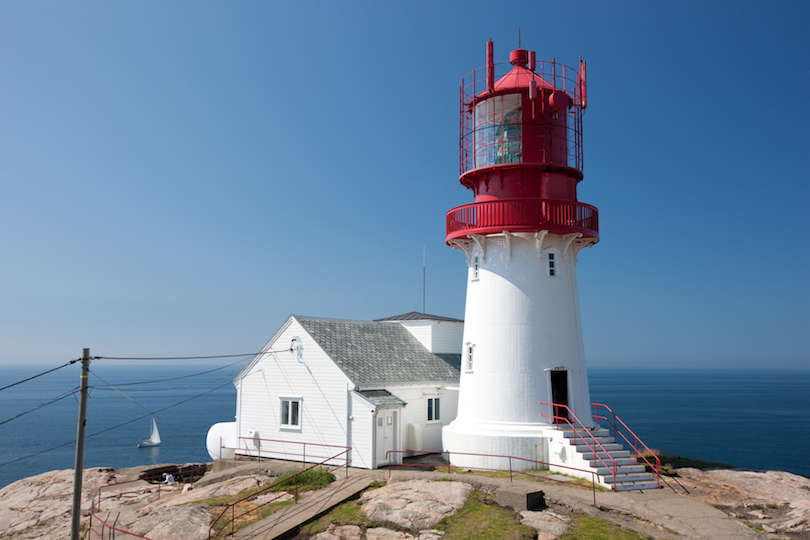 Set at the southernmost tip of Norway, Lindesnes is the oldest lighthouse in the country. While the current lighthouse with its bright white walls and red top was only constructed in 1915, the earliest version of the light station dates to 1656. Ever since then, it has demarcated the North Sea from the Baltic Sea and warned sailors about Norway’s perilous coastline.

As it was commandeered by the Germans in World War II, there are now trenches, tunnels, and a small fort for visitors to check out nearby. Set atop rugged rocks with windswept waters before it, Lindesnes Lighthouse is a photographer’s dreams. 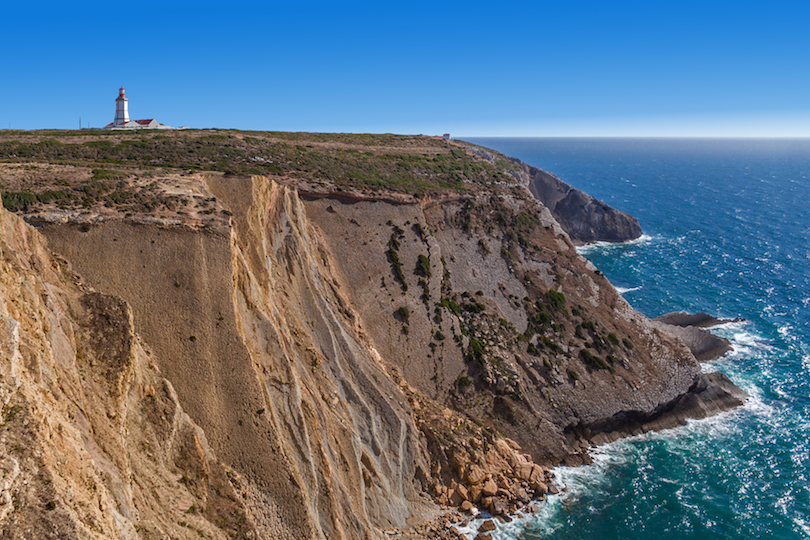 Remarkably enough, a light has warned approaching ships about the treacherous waters of Cape Espichel ever since 1430, when monks erected a beacon on the clifftop. It was only in 1790, however, that the first proper lighthouse was built. This exhibits some delightful and distinctive architecture with its white, 32-metre-high hexagonal tower being its defining feature.

Located at the end of the Setubal Peninsular in Portugal, the lighthouse overlooks a lot of wild and wonderful coastline that once struck fear into sailors’ hearts. Due to its dramatic setting and arresting architecture, Cape Espichel Lighthouse is definitely one of the most beautiful lighthouses in the world. 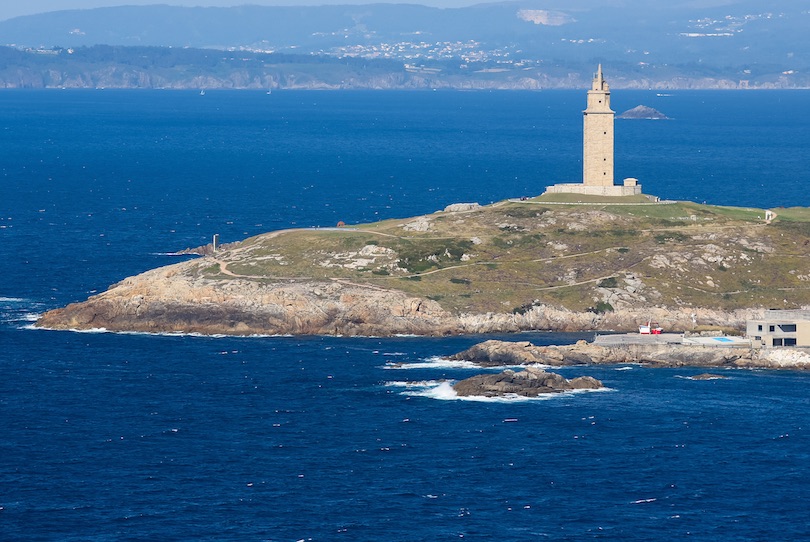 Ever since the second century AD, the Tower of Hercules has imperiously watched out over Spain’s North Atlantic coastline. This remarkably makes it the oldest lighthouse still in use today. Such is its age that it is believed to have been modeled after the Lighthouse of Alexandria – one of the Seven Wonders of the Ancient World.

First built by the Romans, the lighthouse’s 57 meter high, sturdy and square tower was repaired and renovated in 1791. In addition to its astounding age and architecture, the Tower of Hercules’ scenic location on a peninsula in Galicia certainly makes it one of the most beautiful lighthouses in the world. 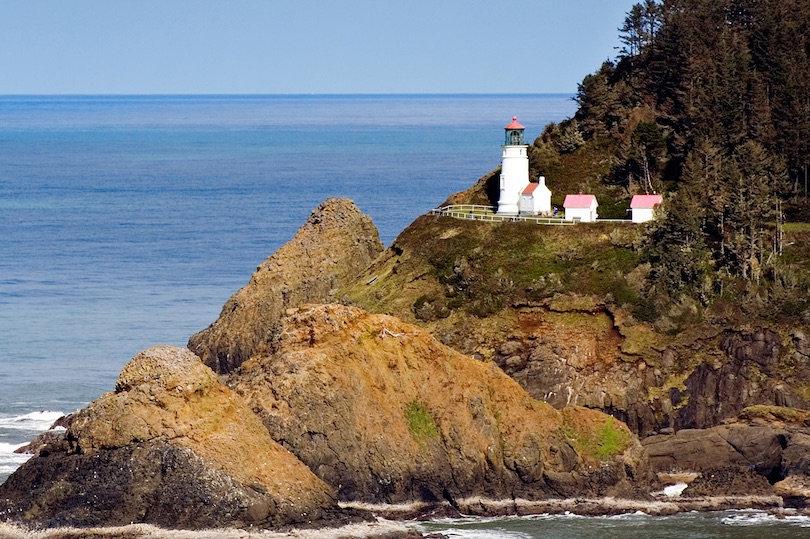 Set in a prominent and picturesque spot along the Oregon Coast, Heceta Head Lighthouse certainly is a fine sight. Overlooking the Pacific Ocean with dramatic-looking rocks below, its gleaming white tower is backed by verdant forests that tumble down the hillside.

First lit in 1894, the lighthouse is named after Bruno Heceta, the Spanish explorer who sailed up and down the Pacific Northwest in the 18th century. Now a designated state scenic viewpoint, Heceta Head Lighthouse is well worth visiting for its commanding views of the Oregon Coast and the Pacific Ocean. 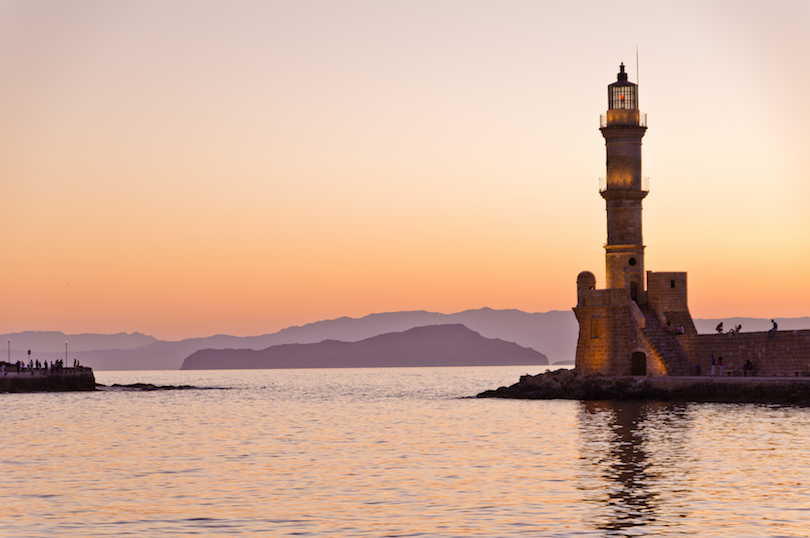 Lying at the entrance to Chania in Crete’s historic harbor, this delightful lighthouse is not only one of the oldest in Greece and the Mediterranean, but in the entire world. First built by the Venetians towards the end of the 16th century, it was subsequently repaired and re-imagined by the Egyptians, Ottomans, and later on, the Greeks.

As such, the lighthouse certainly boasts an illustrious and interesting history as is evidenced by its unique design, which is reminiscent of a mosque’s minaret. It is its attractive architecture and splendid setting with the city in the background that makes Chania Lighthouse such a popular attraction. 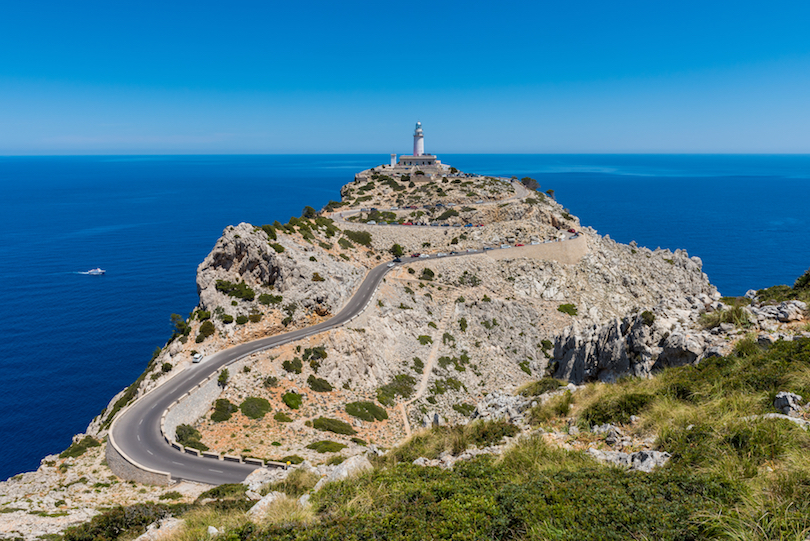 One of the most famous and photographed landmarks in Majorca, Formentor lighthouse lies on the northernmost tip of the Balearic island. Towering some 210 meters above the sea, the lighthouse is perched on top of a lofty cliff with steep drops below it.

Known as Far de Formentor in Spanish, its blinding beacon of light has warned sailors about the dangerous Majorcan coastline ever since 1863. Due to the outstanding natural beauty around it and fantastic views out over the Mediterranean, Far Formentor lighthouse is not to be missed. 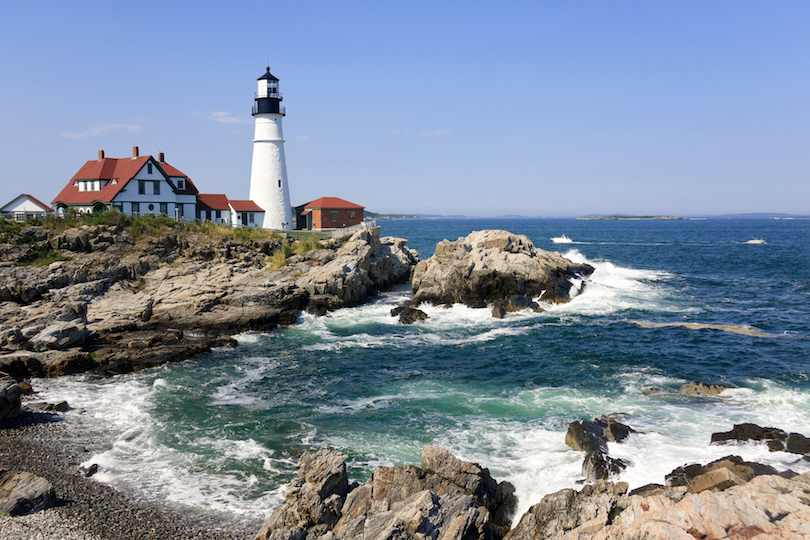 Looking out over the wild, wet, and windy waters of the Atlantic, Portland Head Light has guided sailors back to safety ever since 1791. The historic lighthouse is set on a craggy clifftop in Cape Elizabeth, just to the south of the busy Portland Harbor. Reaching almost 25 meters in height, its white conical tower stands out delightfully against the desolate and rugged coastline that lies around it.

Although it is now automated, visitors can stop by its adjoining maritime museum to learn all about its captivating past and hear the tragic tales of the many ships that were wrecked along the Maine coastline.