Located in Central Europe, Austria is completely landlocked and the vast majority of the German-speaking country is covered by the Alps. As such, most of Austria is very mountainous and lots of alpine valleys, lakes and charming villages and towns can be found scattered among its many foothills. 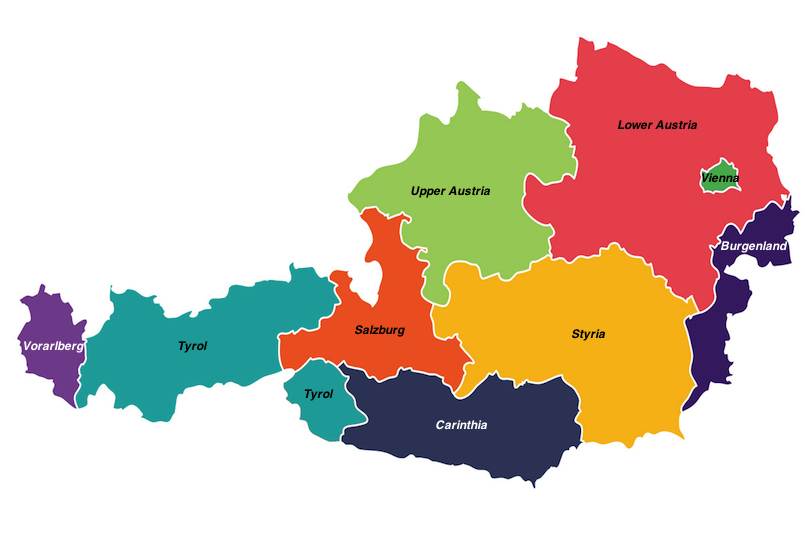 While only about a quarter of Austria is low lying, the lower regions are also worth visiting as it is made up of charming countryside, lovely rolling hills and picturesque farmland. For instance Austria’s thriving capital Vienna is located on a plain with the Danube running through it and it acts as the center of the country as a quarter of Austria’s population lives there with the only other large cities of note being Graz and Linz.

Austria is beautiful to visit in both summer and winter as the scenery changes so drastically between the two and while the former lends itself to hiking and swimming, the latter is perfect for skiing and for wintersports. 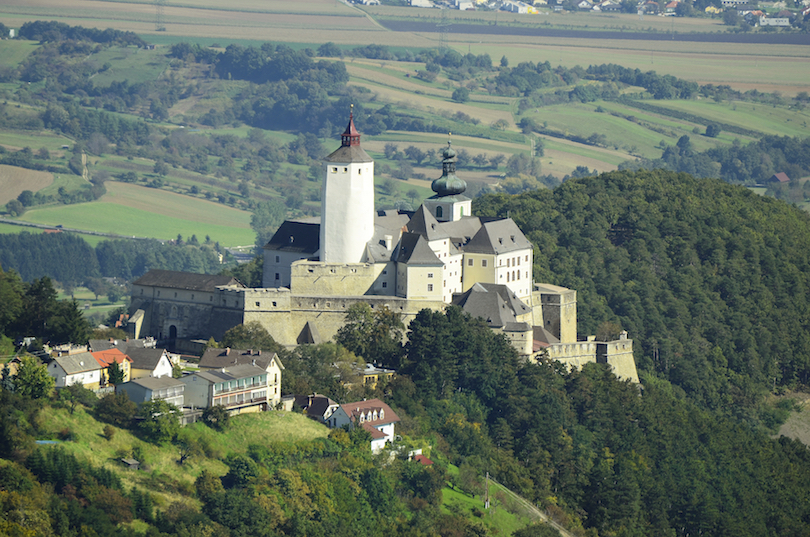 The most eastern region in the country, Burgenland borders Hungary and actually used to be part of it until after World War I when it became a part of Austria. As such there is a different feel and look to its towns and villages and the region is a very popular destination with both locals and tourists alike due to all of the amazing scenery and diverse range of sights on show.

The gorgeous Neusiedel Lake for instance is very picturesque to behold and Austria’s largest lake not only has some charming little towns such as Rust and Neusiedel Am See for you to check out but also offers up some fantastic bird watching and a plethora of fun watersports. In addition to this, these also a number of quaint wineries and scenic vineyards for you to visit in the surrounding area.

While travelling around the region, you’ll inevitably come across some impressive castles (Burgenland means “land of castles) which are hidden away amongst the region’s beautiful landscapes and Burg Lockenhaus and Burg Gussing are just two of the most stunning on show.”

To round off Burgenland’s list of attractions, no visit to the region can be complete without stopping by one of its many hot springs. These thermae arise due to the volcanic activity in the area and the most popular spa towns are Stegersbach and Lutzmannsburg. 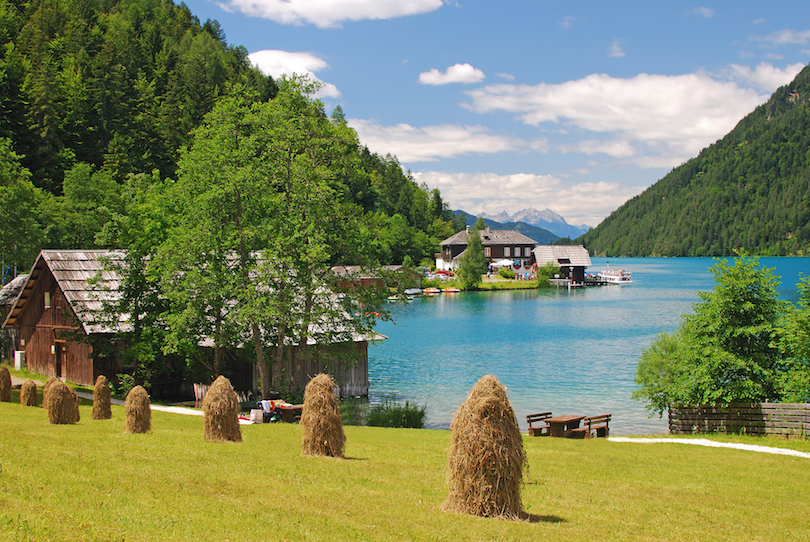 Bordering both Italy and Slovenia in the south of the country, the mountainous region of Carinthia is nestled away in between the Alps in the north and the Karawanken mountain range in the south with the region being home to lots of beautiful alpine valleys and a myriad of glistening lakes.

As such the area is an outdoor lover’s dream as you can hike or rock climb in the mountains, go swimming or sailing in the lakes or even go skiing in the upper echelons of the mountains at Gerlitzen, Nassfeld and Turrach which are all popular ski resorts.

One of Carthinia’s main draws is the huge Lake Worth which is a very popular holiday destination as it is located in one of the sunniest parts of Austria, has so much amazing scenery on show and is a great place to go swimming in the summer months.

While Carthinia is renowned for its mountains, lakes and amazing outdoor activities, it is also home to the breathtaking Burg Hochosterwitz and after having navigated the hilltop castle’s fourteen defensive gates that guard the way to the top you can enjoy fantastic panoramas of the marvellous countryside all around you. 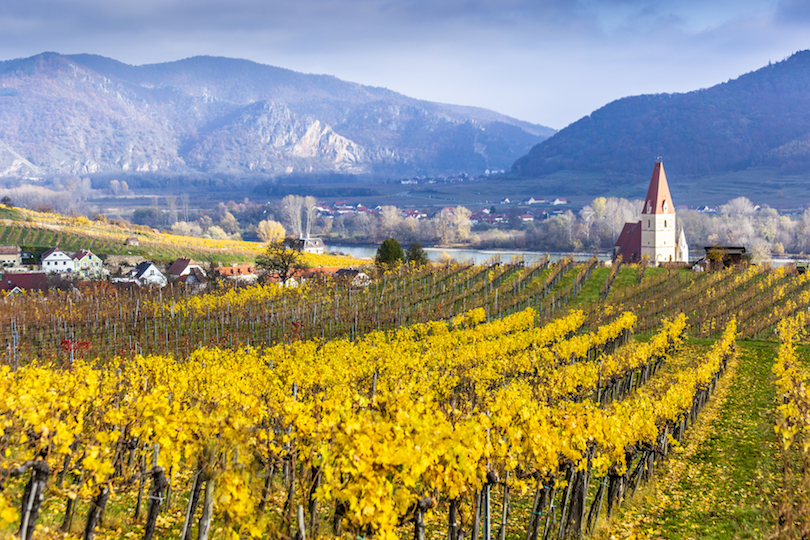 While you would be forgiven for thinking that Lower Austria lies in the south of the country, it actually lies in the northeast and is so named because it is located downriver of the Enns River. Lower Austria also completely surrounds Vienna which used to be considered part of the region.

The landscapes in the region are very diverse as it is home to plains and plateaus, forested highlands, thermal springs and the magnificent foothills of the Limestone Alps. The latter is possibly the most impressive part of the region as 2,000m high mountains loom over gurgling rivers, lush valleys and charming little towns and villages.

Away from the beautiful mountains, the picturesque Wachau Valley is another of Lower Austria’s main draws and many people come to sample some of the fantastic wines which are grown in the fertile vineyards that border the Danube River. Nestled away amongst the scenic landscape of the valley are lovely little towns, castles and ancient monasteries such as those of Melk and Gottweig for you to check out. 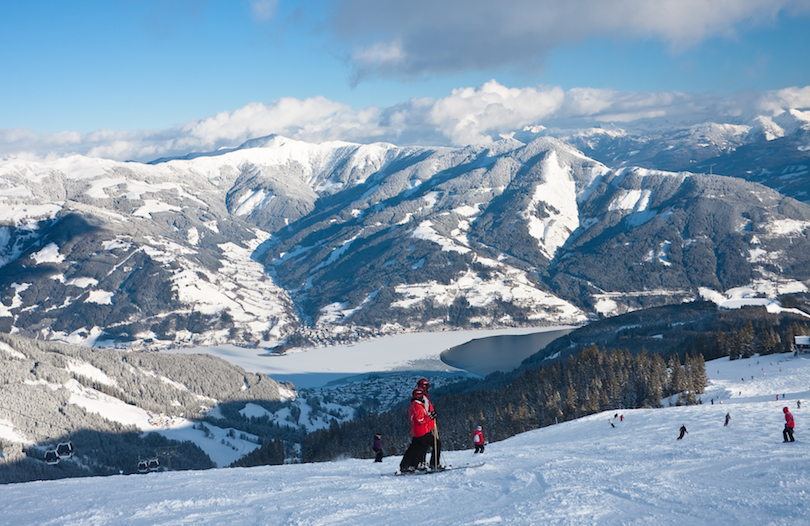 With most of the area being covered in the Alps, the Salzburg region really is spellbinding to explore as glimmering Alpine lakes are tucked away in between lush valleys and the magnificent mountains themselves.

The elegant city of the same name is a great place to visit and it is renowned for being the setting of the famous film ‘The Sound of Music’. With beautiful Baroque architecture on display and interesting museums to be found alongside centuries-old churches and wonderful palace gardens, there is lots for you to see and do and the spectacular Hohensalzburg Fortress which lies atop a hill in the center of town is just one of its many highlights.

With great hiking and skiing on offer at Bad Gastein and lovely lakeside scenery and mountain walks to be found at Zell am See, the Salzburg region really does have the perfect combination of history, culture, outdoor activities and outstanding natural beauty for you to enjoy. 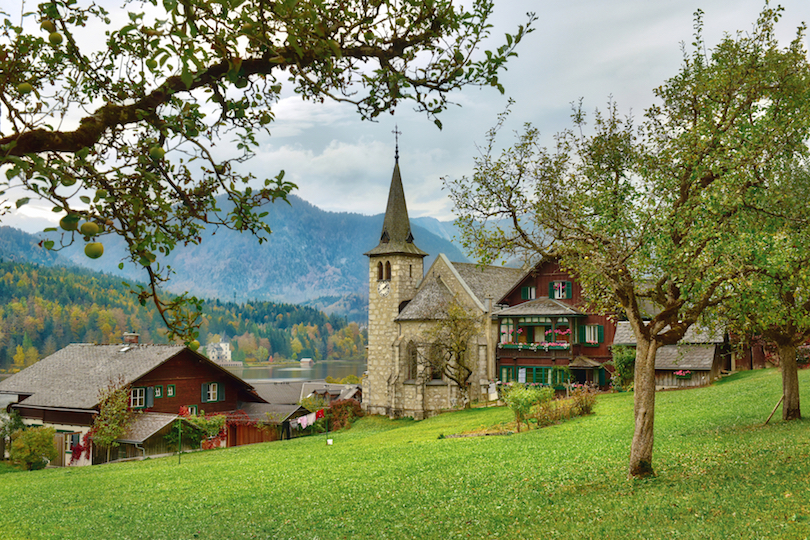 The second largest region in the country after Lower Austria, Styria is also home to Austria’s second largest city, Graz, which acts as a hub for the region, as well as a whole host of impressive and delightfully varied scenic landscapes.

The Gruner See, for example, is one of its most beautiful spots as the emerald-green waters of the lake are surrounded by endless forests and the magnificent Hochschwab Mountains. Mountains, lakes and Alpine rivers make up just some of the region’s amazing natural sights and in other areas you’ll find gently rolling hills covered in vineyards with lovely little wineries for you to check out. Indeed, the region is particularly well known for the delicious white wines it produces.

In yet other parts of Styria are wonderful castles, relaxing spa towns and snow-coated ski resorts for you to enjoy with Schloss Riegersburg, Bad Blumau and Schladming all respectively being well worth a visit. 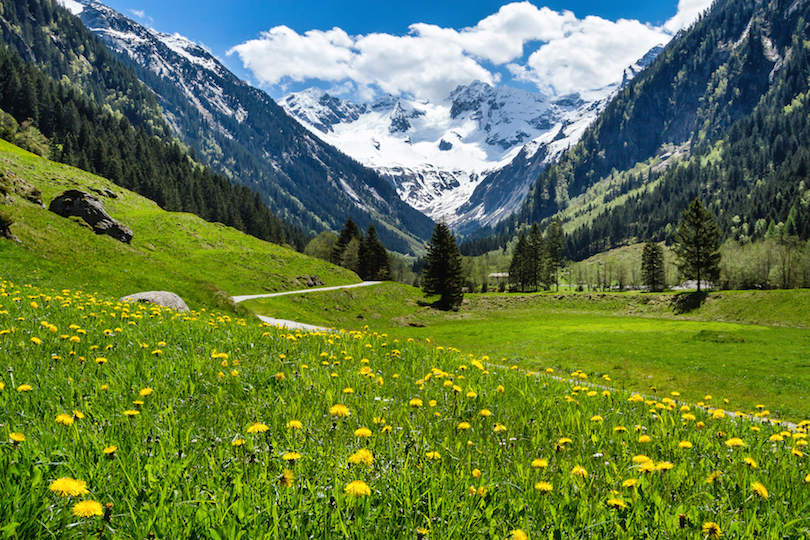 If you’re looking for the most picture perfect image of the Alps imaginable then Tyrol is the place to go as it really does appear as if it has been put together to create the stereotypical image of the Germanic Alps.

Whether it is in summer when the lush valleys and meadows are filled with wild flowers and happily frolicking goats and cows or in the depths of winter when the snow-capped mountains look out over frozen forests and warm, inviting mountain huts; Tyrol is a dream to explore and the region really is a nature lover’s paradise. Consequently Tyrol offers up some fantastic hiking and skiing opportunities as its towering mountains and glorious Alpine valleys are home to some of the best ski slopes, pistes, trails and paths in Europe.

A great base from which to explore the region is Innsbruck as Austria’s fifth largest city has a wealth of beautiful architecture and fascinating museums for you to enjoy and lots of brilliant ski resorts are nestled away amongst the incredible mountains that surround the city. 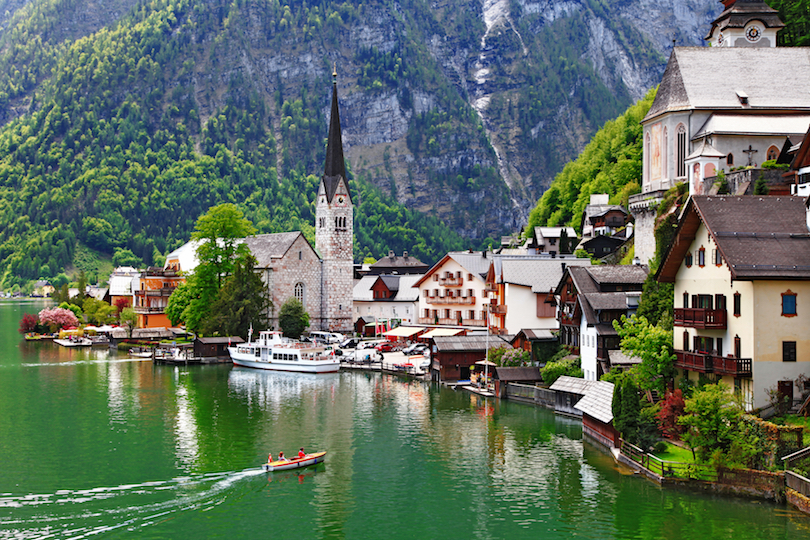 While Tyrol, Salzburg and Vienna all attract hordes of tourists who descend upon the regions for the fantastic sights they have to offer up, Upper Austria attracts comparatively few visitors and so may be the place for you if you’re looking to get to know the more authentic and less touristy side to the country.

Upper Austria also boasts beautiful countryside of its own and while travelling around the region you’ll come across scenic hills and forests that have medieval towns, castles and lakes dotted among them and of course the powerful Danube River that courses through the region. One of the best places to visit is Hallstat as its scenic setting on the lake of the same name with mountains all around it really does make it appear as if it just popped up out of a fairytale.

With charming towns such as Steyr and Scharding for you to visit as well as the vibrant city of Linz and the wonderful rural scenery of Muhlviertel on show, Upper Austria offers up a more relaxed pace of life that is perfect for those want a quiet getaway amongst the delightful countryside. 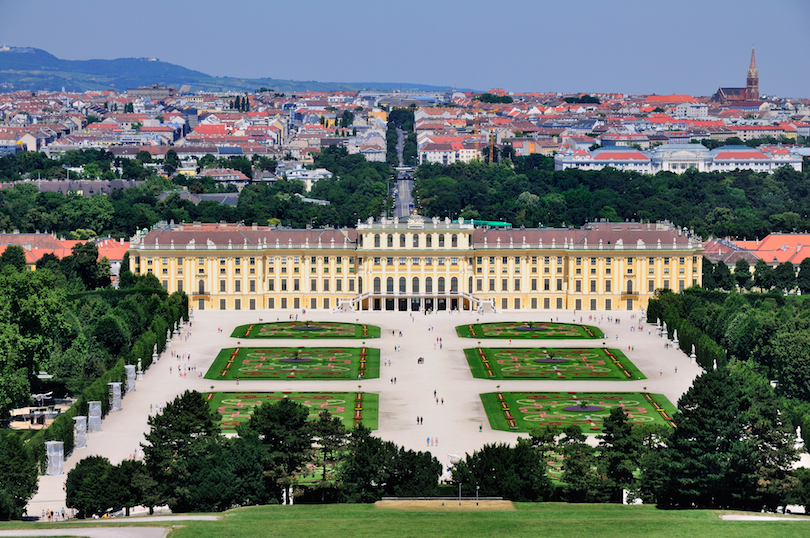 As it was home to the Hapsburg court and a whole host of Emperors and Empresses, it should come as no surprise that Vienna is a visually stunning city to behold with a plethora of palaces, museums and elegant parks for visitors to enjoy.

Alongside its impressive range of historical monuments and cultural landmarks, Austria’s capital boasts an almost unrivalled arts and culture scene as huge art collections can be found in its humongous galleries and museums while brilliant operas, ballets and classical music shows are performed nightly at the Vienna State Opera. As such, the city acts as the political, cultural and economic heart of Austria and it is by far the largest city in the country.

Lying in the northeast of the country and completed surrounded by the Lower Austria region, visiting Vienna is simply a must as although it does not boast the stunning scenery of the rest of Austria, it more than makes up for it with all of its spellbinding spectacles. 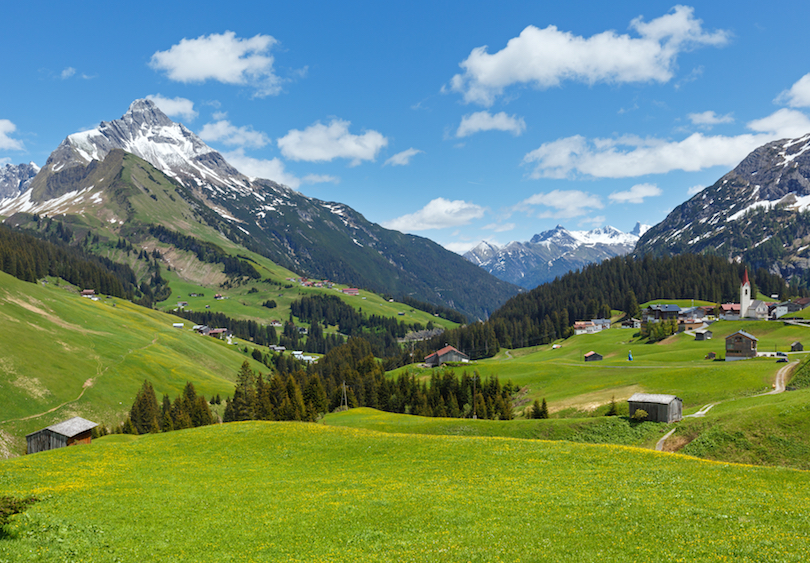 Making up the western tip of Austria, Vorarlberg borders Switzerland, Liechtenstein and Germany and is quite culturally distinct from the rest of the country as it has an Alemanic alpine culture.

Despite its small stature, Vorarlberg is home to lots of diverse landscapes ranging from Lake Constance and the Rhine Valley in the north to the alpine valleys and mountains that make up the majority of the rest of the region. As such it has lots of outdoor activities to offer up as you can go hiking, rock climbing and swimming in the summer or skiing and skating in the winter.

The wealthiest region outside of Vienna, Vorarlberg is a fascinating place to visit for its unique identity and rich cultural heritage and the scenery on show is simply staggering as mountain after mountain rises up before you.