The ninth-largest country in the world, Kazakhstan covers a vast swathe of territory in Central Asia. While many people imagine it to be solely made up of endless, featureless steppe, dramatic mountains, canyons, lakes, and valleys can be found dotted about here and there.

Despite its size, Kazakhstan is very sparsely populated, with the main cities of Almaty and Astana (its capital) being home to the majority of its population – which is the wealthiest in the region thanks to its large oil and gas reserves.

Often overlooked by tourists, the country has a wealth of incredible sights for you to check out. As you’ll often be the only foreigner there, you’re sure to experience the locals’ welcoming nature and hospitality, as they are keen to share Kazakhstan’s many wonders with you. Explore this Central Asian country with our list of the best places to visit in Kazakhstan. 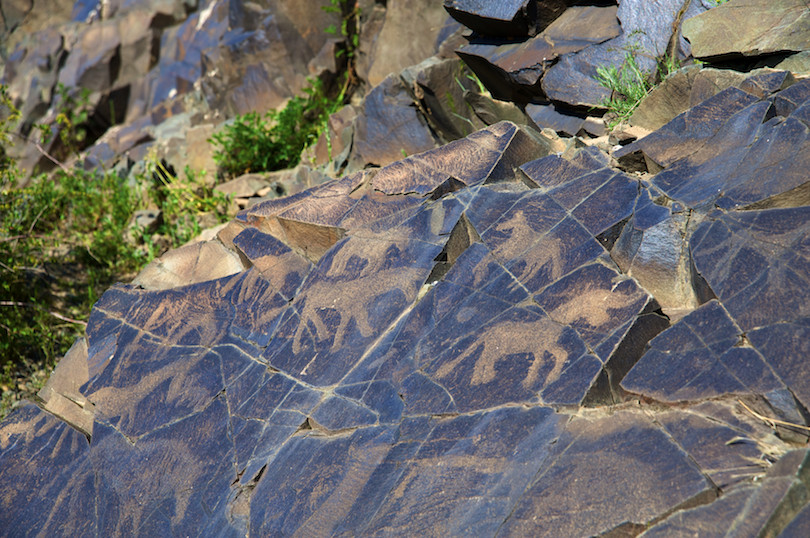 Depicting epic hunting scenes, majestic standalone figures, and a wide variety of different animals and wildlife, the Tamgaly Petroglyphs are fascinating. There are remarkably more than 5,000 of them for you to check out.

With many of them dating all the way back to the Bronze Age, the site really is a special place to visit. Clambering around the scenic canyon’s many boulders and rock formations only to find yet another well-preserved and intricately carved petroglyph is an amazing feeling.

Long a ritual site for nomads, the canyon’s peaceful confines certainly convey the spiritual importance of the location, and coupled with the impressive petroglyphs themselves, the beautiful setting makes it well worth a day trip from Almaty. 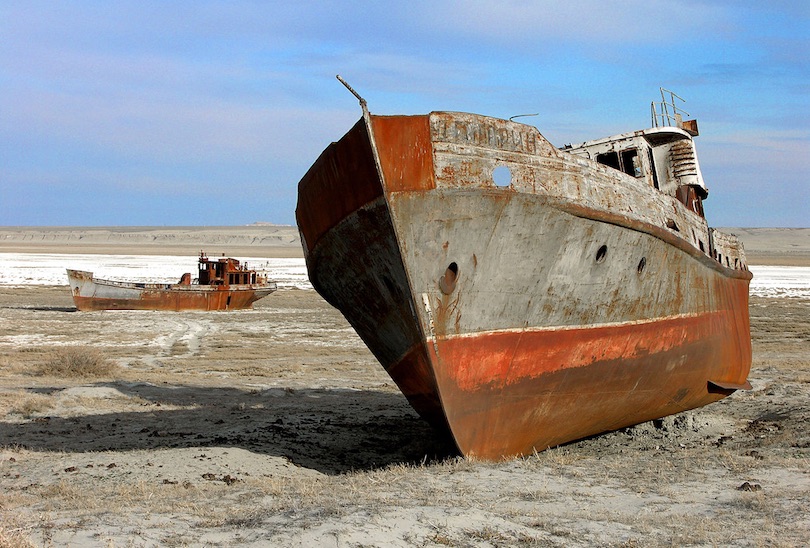 A human-made ecological disaster of the highest order, the Aral Sea dramatically decreased in size from 1960 onwards. Disastrous Soviet-era state plans saw its waters diverted to cotton fields in the desert, where it immediately evaporated or seeped below ground.

Once the fourth-largest body of fresh water in the world, the Aral Sea now stands at just a fraction of its former size, and it is only in recent years that a slow recovery has been made.

Due to all this, the town of Aral is a fascinating place to visit. The former fishing port, which was renowned around the Soviet Union for its large catches, now lies next to endless desert, as the sea’s waters have long since retreated over the horizon.

For people interested in seeing what remains of the Aral Sea, the town of the same name makes for a great base from which to visit ‘one of the planet’s worst environmental disasters’ and learn about the successful government project that is slowly seeing its water levels increase every year. 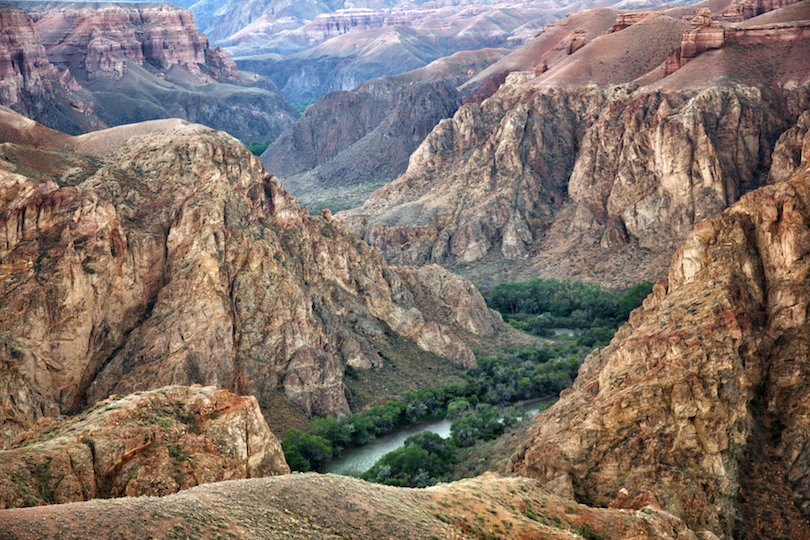 Breathtakingly beautiful, Charyn Canyon in the southeast of Kazakhstan certainly warrants a visit. When approaching from across the endless, featureless steppe, it is hard to imagine the incredible sight that awaits you. Snaking its way through the rock, the canyon stretches around 90 kilometers in length, with some parts reaching a depth of up to 300 meters.

Its ruddy walls and rock formations are reminiscent of the landscapes found in Utah and Arizona in the States. Many people who visit Charyn Canyon say it is just as spectacular as the world-famous Grand Canyon.

Walking through the Valley of Castles, the most impressive stretch of the canyon, certainly is a majestic experience as its humongous walls tower above you. Charyn Canyon is equally bewitching from above as the canyon plunges away dramatically. Hardy adventurers can go whitewater rafting or canoeing along the fast-flowing Sharyn River that runs through part it. 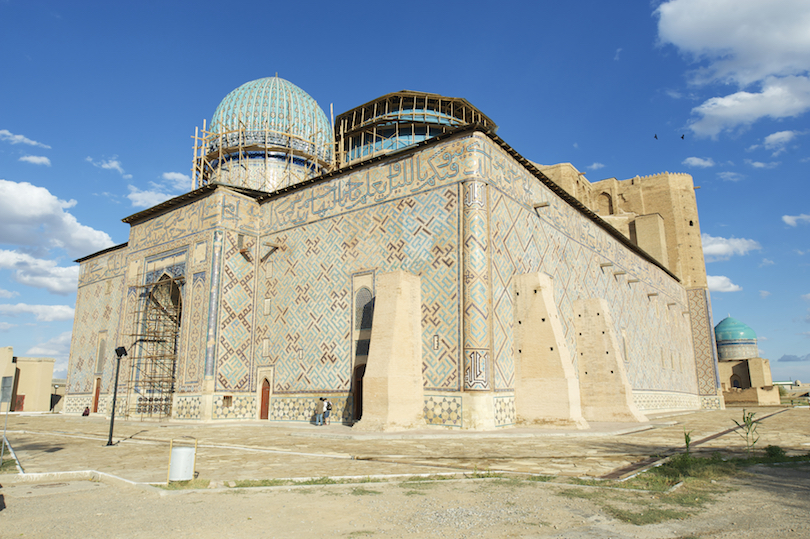 Lying in the south of Kazakhstan surrounded by the Kazakh Desert, Turkestan is a unique city to visit, seamlessly blending traditional nomadic culture with the sedentary city life of nearby Uzbekistan. This makes it a captivating place to explore.

The undoubted highlight is the gorgeous 14th-century mausoleum of Kozha Akhmed Yasaui, which looks like it would be more at home in one of Uzbekistan’s ancient Silk Road cities than in Kazakhstan.

Built by Timur to honor the great Sufi Sheikh, the mausoleum is one of the most impressive and important historical sights in the country. Besides this, the main attractions that visitors to the city enjoy are the ruins of the ancient cities of Otrar and Sauran that lie in the surrounding desert. Other than these historic sights, there is not all that much to do in Turkestan other than wander around its main bazaar and take in the lively atmosphere. 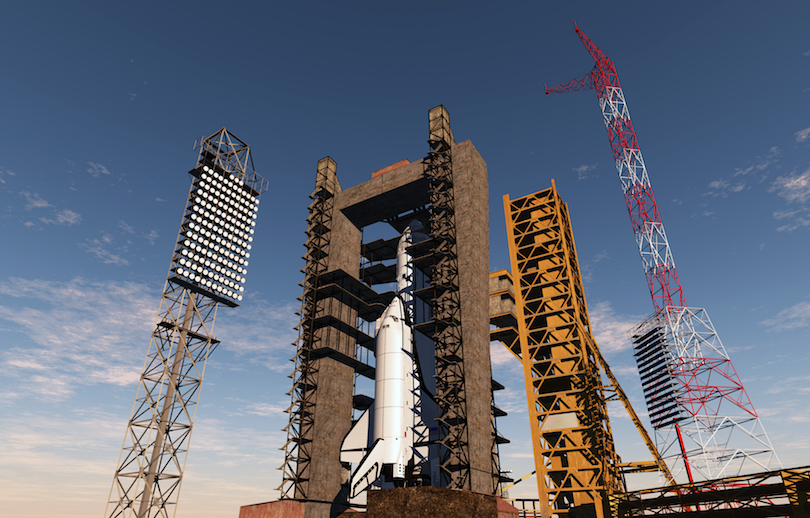 One of the only places in the world that you can watch a rocket being shot into space, the Baikonur Cosmodrome is well worth visiting if you are interested in the cosmos. Even if you aren’t, seeing a spacecraft take off really is an unforgettable experience.

The largest space launch facility in the world, Baikonur is jointly run by the Kazakh and Russian governments. It was from here that Sputnik 1 and Vostok 1 – the first crewed spaceflight – were launched. As such, there is loads of history on show. Visitors can take a tour around the facility as well as the accompanying museum that has lots of captivating exhibitions, models, and memorabilia for you to enjoy. 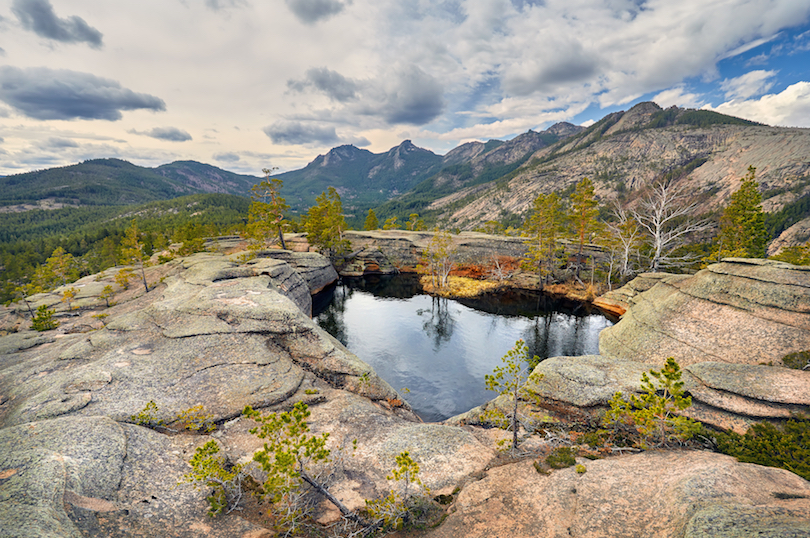 Located in Kazakhstan’s Central Highlands, Karkaraly National Park will delight nature lovers and outdoor aficionados alike. Covering a huge expanse of territory, the national park is home to a wide variety of fauna and flora, with foxes, deer, and wolves all residing within its endless forests.

Tucked away among its many amazing landscapes are glistening lakes, gaping caves, and distinctive rock formations, with breathtaking views wherever you go. Due to its wide range of incredible natural sights, Karkaraly National Park is a delight to explore, with hiking, bouldering, and camping all popular outdoor activities. 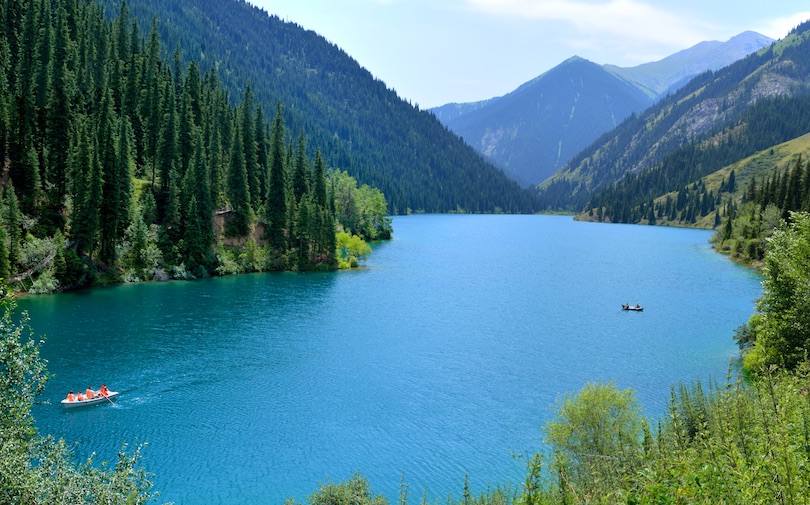 Lying around 250 kilometers away from Almaty, Kolsai Lake actually has three lakes to visit. Strung out along the Kolsay River that weaves its way among the forest-coated Tian Shan Mountains, the shimmering lakes are often referred to as the ‘Pearls of Tian Shan.’ There is an absolutely gorgeous but strenuous hike you can do that takes you all the way from the lower to the upper lake.

A very popular tourist destination amongst local Kazakhs, the region surrounding Kolsai Lake has lots of great campsites and homestays for you to stay at, and many people go horseback riding between the lakes. Boasting some of the most dramatic scenery in the country, the lakes really are worth visiting if you have the chance. 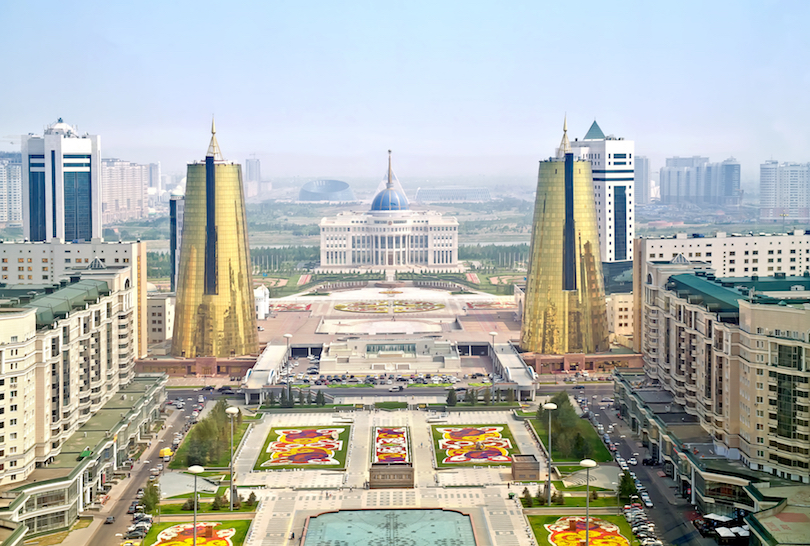 Recently renamed Nur-Sultan in early 2019, Astana – as many Kazakhs still call it – is the nation’s ever-changing capital. Each year, enormous landmark buildings spring up, with each new addition more impressive than the last. Lying amid the country’s featureless northern steppe, Astana is one of the most modern and futuristic cities in Central Asia, with lots of towering skyscrapers.

Wandering around its large boulevards is an interesting experience, as Soviet, Kazakh, and Western influences can be seen wherever you go. The main attraction is undoubtedly the stunning Bayterek Tower that lies at its heart.

In addition to this, the humongous Khan Shatyr is well worth visiting for its wealth of shops, restaurants, and unique design – as is the city’s fantastic national museum.

As Astana continues to develop and grow, lots of young people from around the country are pouring into the capital, so there is a very dynamic and youthful feel about its streets. 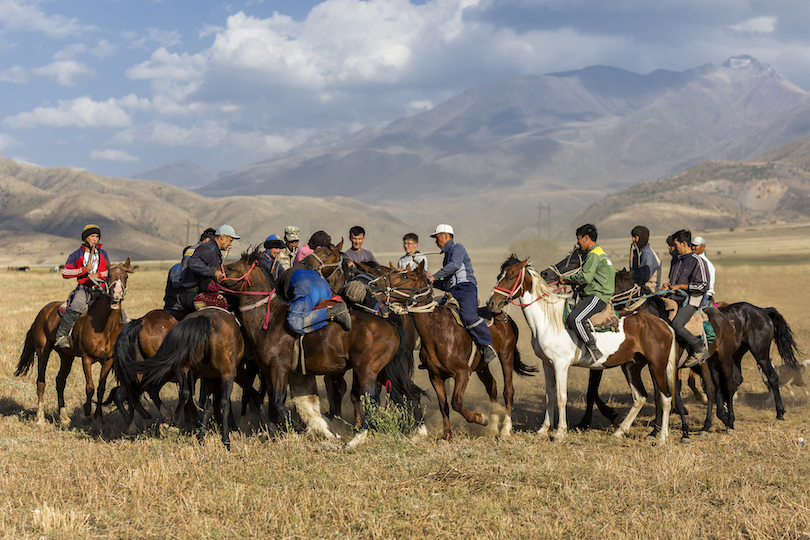 Established all the way back in 1926, Aksu-Zhabagly is the oldest nature reserve in the whole of Central Asia. Encompassing everything from lofty, snow-capped mountain peaks and glaciers to gushing rivers, sweeping valleys, and, of course, endless steppe, Aksu-Zhabagly really is a treat to explore.

Full of incredible vistas, the nature reserve is home to a plethora of amazing wildlife. Its myriad of trails and paths take you past some breathtaking natural sights, with Stalactite Cave, Aksu Gorge, and the twinkling waterfalls of Kshi-Kainy counting among its most impressive sights. 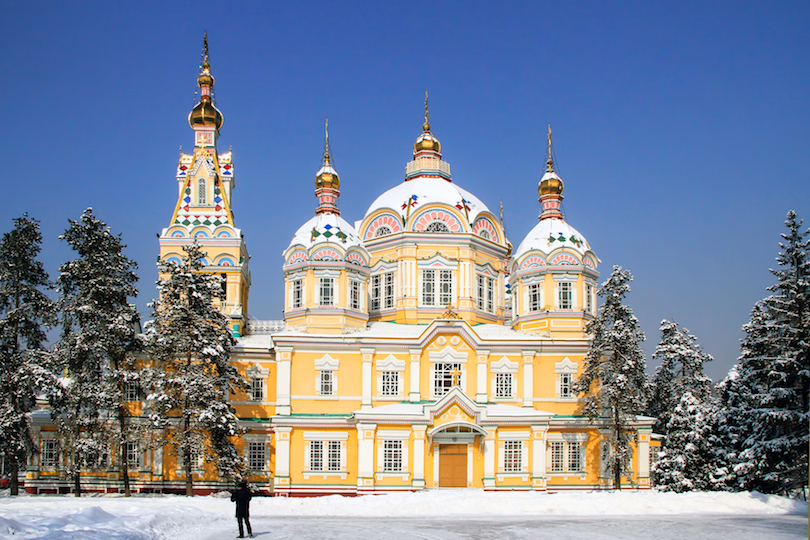 The capital of the country until 1997, Almaty remains Kazakhstan’s largest city, as well as its cultural and commercial heart. As such, there is a very wealthy and sophisticated air about the place, with lots of trendy restaurants and bars for you to try out.

With some great museums and historic sights dotted about here and there, there is a lot for you to see and do, and many people use it as a base from which to explore the region.

Almaty truly is blessed when it comes to the outstanding nature that lies at its doorstep. Its scenic setting at the foot of the gorgeous Tian Shan mountain range makes it exceedingly photogenic. Home to Medeu, the highest skating rink in the world, Shymbulak, a wonderful ski resort, and the stunning Big Almaty Lake, the mountains have a wealth of amazing sights to discover. One could easily spend a week or two seeing all that Almaty and its surroundings have to offer.

Map of the best places in Kazakhstan 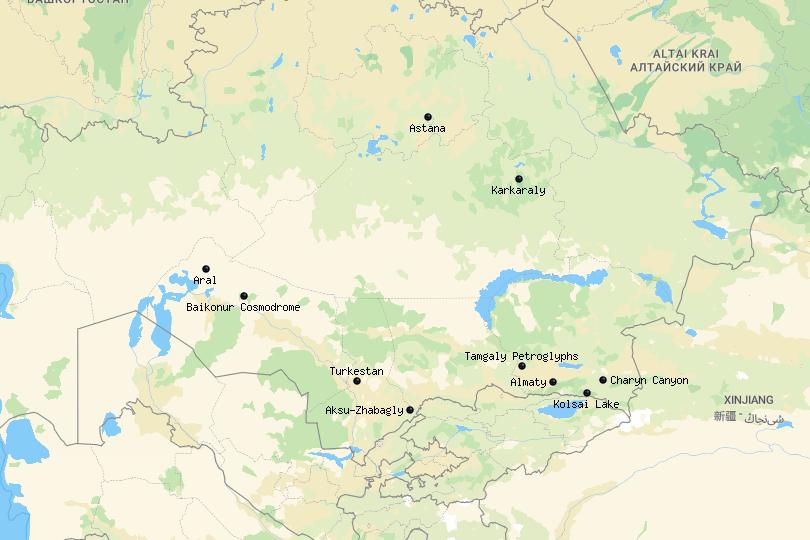